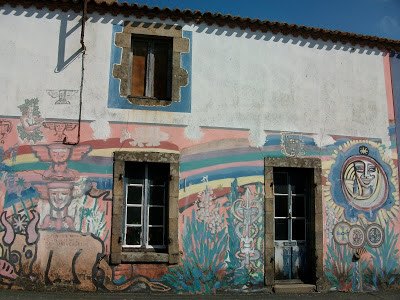 Regional newspaper Ouest-France has reported that Marcel Marionneau from the community of Le Bourg-sous-la-Roche in the Vendée department, who was known locally as the author of the texts and decorations on the facade of his house, died early November 2019.

Marionneau, who was born in 1943, in his youth was attracted to making art, in particular sculptures, and when he was in his mid-twenties he took lessons with artists in Paris and Angers .

In May 1968 he returned to his native region and settled in Le Bourg-sous-la-Roche, part of the municipality of La Roche-sur-Yon in the French department Vendée, a place where he would spend his entire life.

His house on the rue Emile Bauman has undergone various changes during the fifty years that Marionneau has lived there, both on the inside, where Marionneau installed his workshop and situated his sculptures, paintings and books, and on the outside, where he added decorations and texts to the exterior walls, which changed over time and eventually almost disappeared. 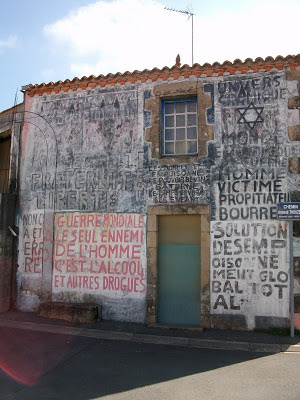 An article in the regional journal Ouest France of May 2019, written by Patrick Guyomard, who met Marionneau at home, tells that at that time the interior wasn't only filled with sculptures and canvasses with paintings, but also with books, documents and archives. which testified to the search that the artist undertook for what he referred to as "the intellectual synthesis of human knowledge".

One of the themes Marionneau reflected on was the volume courbe (curved volume) ¹, which has to do with the perfect beauty. Just as the circle and the square and their spatial equivalents the sphere and the cube can be seen as ideal shapes, one can reflect on and theorize about the shape of the ideal curve and in particular how this would manifest itself spatially as a volume.

Marionneau has devoted himself a lot to this theme in theory, but also in his practice as a sculptor.

Regarding the decorations on the facade, it is not known in which year Marionneau started this project, but its quite possible that he already began in the 1970s.

The artist did, however, indicate something about his initial intentions. They had to do with a card game known in the Vendée called Le jeu de l’Aluette. It has been played for centuries in groups of four people, two against two, with a set of cards that includes all kinds of images and symbols.

By making frescoes on the outside wall in such a familiar pattern, Marionneau wanted to communicate with the other residents.

Around 1990 the entire facade was decorated with a beautiful set of frescoes.

However, when a television crew would visit the site to make recordings for a broadcast about the now well-known art environment, Marionneau panicked and replaced part of the frescoes with texts.

Around 2005 a new moment came in the development of the art environment.

Marionneau then decided to focus his attention on painting and sculpting. This also included that he abstained from further development or maintenance of  the decorations on the facade and the side walls. In the course of the following years this would lead to their gradual decay. 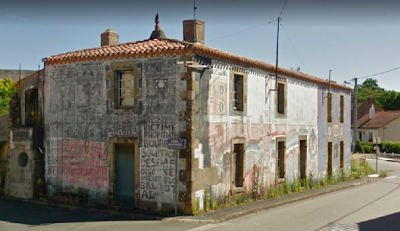 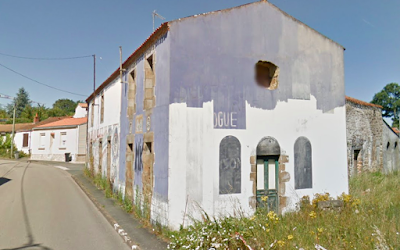 The pictures above show that in June 2018 the left side wall still included the (meanwhile affected) texts.

Marionneau in the artworld

On the internet virtually no information is available about Marionneau's position in the art world. An entry on the Art Insolite website suggests that his artistic work isn't part of French mainstream art, but belongs to what is referred to in France as art singulier (singular art),

This indication is also used in an announcement of an exhibition of his drawings and sculptures in June 2018 in Galerie Monier in La Roche-sur-Yonne.

Documentation
* There was a website by or about Marionneau, but this one isn't available anymore
* Article (November 2019) in regional journal Ouest-France announcing Marionneau's death
* An earlier article (May 2019) by Patrick Guyomard, also in Ouest-France with a report about a visit to Marionneau's house and workshop
*Some pictures on website Art Insolite, with a text by Jean-Pierre Faurie, republished on the weblog of Sophie Lepetit (October 2010 and September 2017)

note
¹ Volume Courbe is also the name of a London-based band around singer/songwriter Charlotte Marionneau, who comes from France and is referred to as a friend of Charles Marionneau