One of the more than twenty parks in the Russian city of Yekaterinburg, the Foresters Park (Лесники Парк) in the south-eastern part of the city, includes an ensemble of trees transformed into sculptures.

This artistic project, started in the late 1970s, came about through the cooperation of two employees from a forestry institute and an artist named Valery Gavrilov, whose creations contributed significantly to the specific character of this ensemble of sculptures.

Life and works of Valery Gavrilov

Gavrilov was born on September 10, 1948 and at a young age it already was clear that he had great artistic skills, so he went to an art school in Yekaterinburg and became a drawing teacher at a school.

He did not join the official Union of Artists, so in the 1970s his artistic activities took place in the non-official artworld of Yekaterinburg

It has been said about him that he wavered on the thin line between genius and madness and that he had an enormous inner strength. In his relatively short life Gavrilov produced thousands of paintings, tens of thousands of graphic sheets, hundreds of photos and numerous wooden sculptures. His house, considered suitable for demolition, was a place for discussion and festivities for many from the non-official art world.

This non-official underground group of artists in Yekaterinburg in the 1960s and 1970s was searching for new forms in art. In those years, Russia still had the Soviet regime, and these artists did not have the opportunity to raise their views in public (art) magazines or to show their work at official exhibitions.

Only in the years of perestroika would underground art become public. In Yekaterinburg in 1987 the first uncensored art exhibition, Surikova 31, was held and in the 1990s a new turn would take place with the group of artists around Bukashkin, the self-taught artist who proclaimed Paint the garbage.

Gavrilov tragically died because of a choke in 1982, just a day after he turned 34.

Creating an ensemble of wooden sculptures

In the context of an art world ruled by the government it is quite special that in 1976 Valentin Chernov and Gennady Povod, employees associated with the Forestry Institute, together with Gavrilov, unhindered by censorship or other government involvement, were able to start an art project in the Forestry Park. Povod was the head of the wood processing department and Cherov was deputy dean of the faculty of mechanical wood processing ¹.

But so it happened. The three started the project, this with the agreement of the director of the Institute, and also with the cooperation of the local authorities, who welcomed and facilitated the addition of the sculptures to the public space the park is (such as other sculptures by Gavrilov would embellish other places in the public space, such as school yards and children's playgrounds).

Valentin Chernov was the leading person in terms of developing the overall theme for the set of sculptures. Following his passion for the history of the Urals, the sculptures would especially relate to the ancient peoples who inhabited the territory of this area, such as the Issedon and the Arimasp.

Chemov would also make sketches which Gavrilov used to make his sculptures.

The art environment initially included 18 sculptures, one of which -The fear of dispense- has since disappeared ¹

It has been said that currently the ensemble is somewhat in decay, and indeed some sculptures are overgrown, but considering that they were placed some forty years ago and that the collection is not an official monument and therefore enjoys no protection from local authorities, it seems rather special that nowadays so much of the creation is left.

Starting with a sculpture of Herodotus, the Greek historian living 500 years before Christ, the sculptures show the development of humanity as expressed in myths and legends, with struggles between ancient peoples (the fabulous Issedon and Arimasp), images of former gods, but also of a young woman protected by a man. 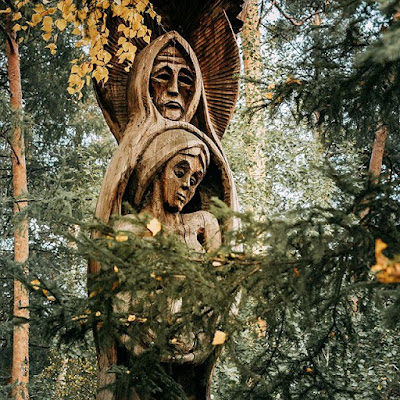 In 2019 Stanislav and Irina Shminke, artists from Yekaterinburg, re-installed signs with explanatory texts at the bottom of the sculptures, so that they now each have a name and description. Irina also contributed an article about Gavrilov's wooden sculptures to the Uralnash website that includes articles and documentation on interesting and unexpected issues in Yekaterinburg (see documentation).

Documentation
* Irina Shminke, Wooden idols of Yekaterinburg, article (October 2019) on website Uralnash (a richly illustrated text about Gavrilov's sculptures in the Forestry Park and on other places in
Yekaterinburg). Anna Sitnikova provided a translation of this article into English
* Maria Bogacheva, Idols of the Siberian tract, article (March 2015) on website Uraloved (illustrated text about Gavrilov and the sculptures  in the park)
* Website Museum of the Tree, with an undated series of photos of the sculptures
* A series of photos on the website photo-history.livejournal  of some of the sculptures, taken rather soon after the were installed
Video
*  Video by Uralnash (2'05", July 2016, YouTube)

notes
¹ I am indebted to Stanislav Shminke for this information