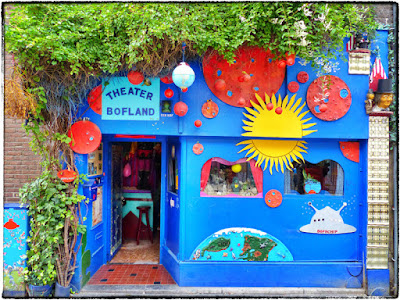 The picture above shows the decorated front of an ordinary house in an ordinary street in Hasselt, a town of some 78000 inhabitants in the north-east of Belgium.

The owner of the house has transformed the ground floor of the property into a theater/museum, named Bofland in Flemish, which in English means Lucky Land. The back yard of the property includes a variety of sculptures and other creations. All together a colorful art environment 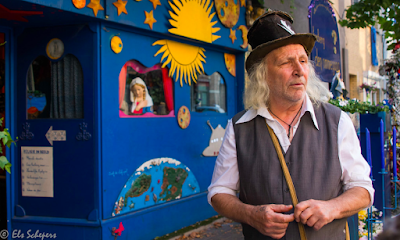 The one who created this art environment/theatre/museum is Robrecht Leenders, who was born in 1948 in Heusden, some 17 km north of Hasselt, where his father had a music store. Leenders himself later said that he grew up in a loving family.

The internet has no information on how Leenders was doing once he was an adult. In view of the activities he has undertaken since the late 1980s, it is not impossible that before that time he was part of alternative groups or experimental artistic circles.

How this may be, after a number of wanderings, in 1985 Leenders ended up in Hasselt, the city where he would live for the rest of his life and also the city that would get to know and appreciate him as a theater artist and a song singer traversing the city with his bike and guitar. 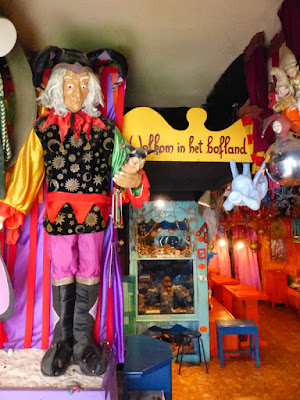 Once feeling at home in Hasselt,  Leenders step by step began to transform the ground floor of his house into an interactive educational theater. There is a small entrance hall where visitors are welcomed, there is a small stage against the front wall bordering the street,  and there is seating in the form of groups of tables and chairs.

The interior has been richly furnished with all kinds of decorations, fairy-tale scenes, viewing boxes and miniature arrangements, but, above all, every part of the red painted wall and ceiling tells a story by means of colorful posters on the walls and the specific creations arranged around. a view of the interior

The theatre has a special theme. It relates how people treat the earth badly and how aliens from the Bof Planet come to save her by bringing love and take with them the Belts, who are the bad guys.

Bofland theatre was regularly visited by groups of children, for example to celebrate a birthday or as part of a school project. Leenders with his young spirit and great imagination, would entertain them by telling stories and singing songs, accompanying himself on the guitar.

The decorated garden is part of the project 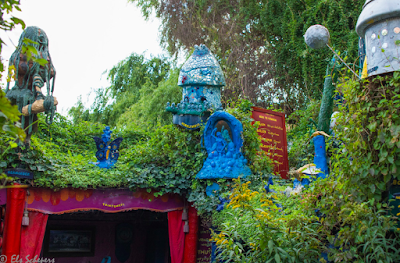 The accompanying pictures show some tall trees, which is due to the fact that the back garden of the house borders on a piece of forest that has survived for many years amidst the surrounding urban buildings. 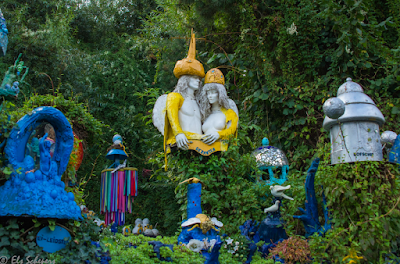 This abundance of greenery enhances the already remarkable allure of the back garden, with its variation of specific creations with which Leenders enriched the space.

There are metal structures that look like spaceships, which of course refer to the inhabitants of the Bof planet who in Leenders' theater project visited the earth, On the terrace of the garden there are some blue colored high poles carrying blue colored bird nests filed with yellow and white colored young ones.

There are also some sculpted items, such as the small grotto in blue, as can be seen in detail in below picture.. 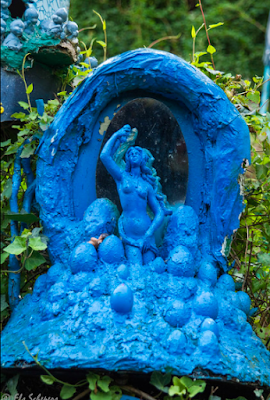 The theater now is a museum

Because he was getting older and with less stamina, Leenders decided in 2017 to end the theater performances. The site as such, however,  continues to exist, now as a Museum.

The city of Hasselt has recognized the specific value of this art environment and has bought the house, this to Leenders' reassurance with respect to the future of his creation.

At the beginning of 2014, the internationally working photographer Jos Aerts, who lived in Hasselt, got Leenders' cooperation for a photo project about him and his art environment, which led to the exhibition Gen-erations in the local museum Stadsmus  (15/10 - 8/11) 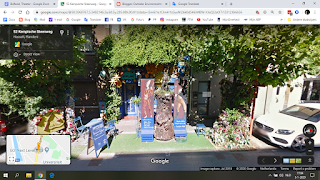