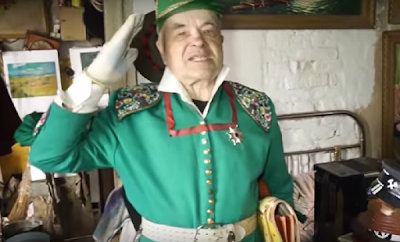 screenprint from the first video in the documentation


One can encounter him in the center of Kirov, a city of some 473.000 inhabitants in Russia, located at some 1000 km north-west of Moscow. Almost every morning Victor Sergejevitsj Kazakovtsev, locally known as Vyatka fashionista ¹, sets out in one of his many special outfits to take a walk in the center of the city.

Kazakovtsev was born in 1946 in the community of Arbazh in the Kirov region. Already in his younger years he demonstrated musicality. He had a nice voice, could sing well and liked to play the accordion.

He attended a music school, after which he got a job in the regional cultural center of the village of Tuja as an assistant for amateur performances, such as accompanying the choir and a dance ensemble.

In that job he also helped with choosing and designing costumes for performances. 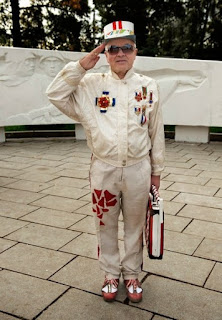 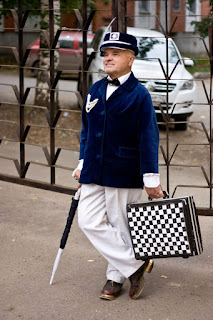 Kazakovtsev then became director of the Palace of Culture in the city of Kirov.

In the late 1980s his health did not go well. Already from the age of 14 he suffered from epileptic seizures, but now his symptoms were such that he had to be admitted to a neuro-psychiatric clinic.

Due to these health problems, Kazakovtsev was eventually declared unfit for work. 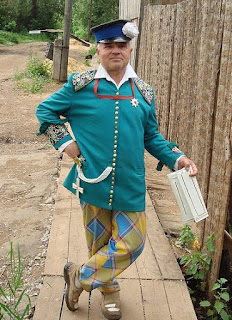 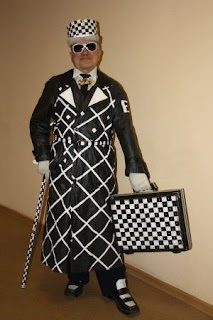 Now a single, divorced from his wife, two adult sons living elsewhere, he had to live on a benefit from the state because of his disability.

From childhood on, also because of his mother's influence, he liked to wear nice clothes and now living alone, without a job but with a lot of time, he began to shape his appreciation for nice clothes into a passion for special clothing.

Kazakovtsev went visiting second-hand stores where he could buy costumes and other fashion items for a small price, which he thereafter on his old-fashioned hand-driven sewing machine converted into a suit to his taste. All his creations came from his rich imagination and when making uniform-like clothing (as in above picture), he was careful not to imitate army and comparable official uniforms, so as not to come into conflict with authorities.

In the first years of his special hobby, he also did not want his activities to become known to others, but when perestroika began in 1993, that attitude changed and from then on he dared to go public with his hobby.

Kazakovtsev started wearing his creations in public and gradually -certainly in the last decade- he became a well-known public person in Kirov, got attention from the press, was presented in videos on You Tube and was asked to appear on regional and national television.

The videos show he likes to do acts, for example portraying a pipe smoking ship's captain (although he never smokes nor drinks). 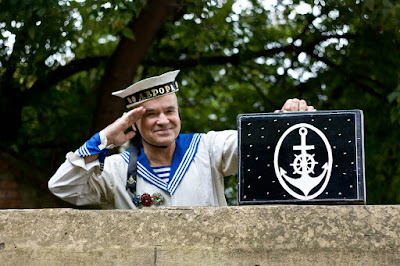 In the old and small wooden house where he lives, the walls of the living room are fully covered with calendars with images of artworks made by famous artists and paintings by Kazakovtsev himself.

And then: clothing is everywhere, not just in a couple of cupboards, but also hanging on nails in the wall, lying on chairs and on his bed......

All items of his extensive collection of over a hundred garments are put together as in a storage, without any form of presentation in an arrangement. 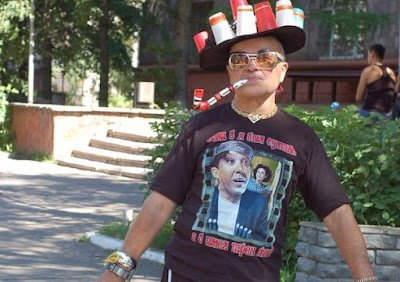 So, exhibiting his fashionable creations does not happen in the sheltered surroundings of Kazakovtsev 's house, but in the much larger environment of public space, when he makes his walk in the city center. Or, as has been noted in other words: Kazakovtsev was removed from the stage when he had to quit his job as a director of the Palace of Culture, but then he made the entire city a stage, where he now has more spectators than in the Palace.

Whatever the case may be, the collection of around a hundred colorful and imaginative items of clothing and costumes scattered throughout the relatively small house, as such can be regarded as an art environment.