Feurs, a community of some 8000 inhabitants, located along the River Loire, some 70 km west of Lyon, according to reports dating from 2008 was home to an art environment in the capacity of an ensemble of flying objects mounted on high poles.

This ensemble was created by Roger Jeampierre, who was born in the early 1930s.

Jeampierre worked in Feurs as a plumber, who at some moment became responsible for monitoring the network of the company that distributes the drinking water in Feurs, a job named fontanier in French.

As such he lived in or next to some old buildings of the city's water company.

The above picture depicts Jeampierre's house, located along the route de Chambéon in a rural area on the left bank of the Loire river, opposite the town of Feurs, which is located on the right bank.

A view of the site made by Streetview in 2008, shows that the poles bearing the flying items stand along the (vegetable) garden of the house and could therefore also have acted as scarecrows. 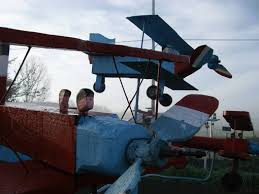 Jeampierre has been an admirer of aircraft all his life, so it is not surprising that the items on the poles in particular include a number of replicas of aircraft.  The models date from earlier years and most aircraft have a pilot on board, such as the single-engine biplane pictured above.

In the absence of recent reports about this art environment, it is not clear whether this site currently (January 2020) still exists.

Documentation
* Article by Thierry B. on his weblog
* Entry on website Art Insolite 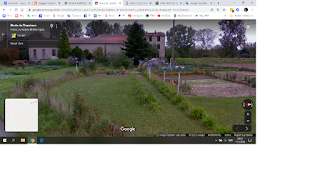