Oxton Village, in earlier years a rural hamlet in England, currently is a suburb of the town of Birkenhead, which is located on the left bank of the mouth of the river Mersey, opposite Liverpool.

In January 2020, a Liverpool newspaper reported on the discovery of a rented Victorian ground floor in this community with an interior fully decorated with paintings on walls and ceilings, and fireplaces surrounded by life-size sculptural creations, all this without the neighbors or even the artist's family knowing anything about it. 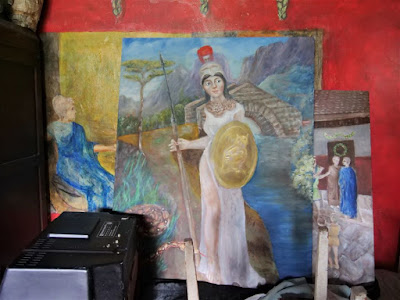 As a young boy he was rather creative, which became clear when he for example made plasticine toy soldiers executed with astonishing details. So it was obvious that after his primary education he went to the Laird School of Art in Birkenhead, the first public school of art outside of London, opened in 1871.

He also studied drama at a local college where he developed his ability to deliver speeches -very loudly- and he taught others to do the same. 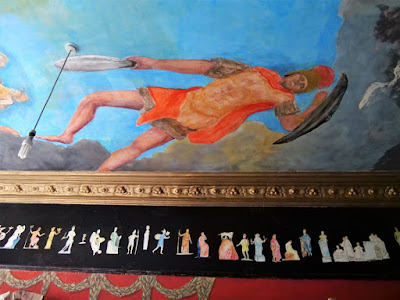 After this schooling Ron had a variety of jobs, such as cutting rubber letters at a printing firm, working in soft furnishings in a department store, inspecting goods in a factory, but he wasn't the person to like being told what to do and usually his jobs ended up leaving because of disagreements.

Ron also tried to work as a self employed artist, painting murals and portraits, and for that he set up Minstrel Enterprises, a project that in professional sense had only limited success. However, in 1975 he did receive recognition in the Liverpool Echo and on television for turning his bedroom in his parents' (rented) house into a Roman villa !

A very flamboyant personality, seeking attention when out on the street, Ron often dressed in extraordinary outfits of his own creation. He would tell people that he was working for the Secret Service.

In the eyes of the residents in the area where he lived, he was somewhat eccentric. They saw him walking around in these self-made outfits, sometimes with a cart with a life-sized papier-mache model he had made of the Egyptian queen Cleopatra, or transporting a large bag filled with cement he needed to make sculptures.

Ron's social-political views were rather conservative, unlike those of his sister Pat Williams, a few years older, who had joined the Liberal Democrats and was a councilor (1987-2016) and mayor (in 2002) of the Metropolitan Borough Council of Wirral, in which Birkenhead is located

This difference of opinion and Ron's dramatic personality, and frequently outlandish and inappropriate behaviour, wouldn't facilitate the exchange of ideas between Ron and his family, nor encourage relatives to regularly visit Ron at home. In addition, Ron himself was very protective of his private domain.

But the relationship between Ron and the family as such remained good, and the family also knew about Ron's activities with regard to the decorations in his house, albeit that they had no idea of the nature and certainly not of the size thereof.

In particular when Ron's decorations started to cover almost all walls and ceilings, he became  extremely reluctant to welcome visitors, except maybe some special friends, afraid as he was that his landlord would hear of his wall decorations and that he would be expelled from his house.

But this reluctance to receive visitors also meant that his broken gas heater could not be repaired.

In the last years of his life he lived alone, without heating, preparing food on a camping gas appliance, living amidst his decorations and the more than ordinary number of  things he had collected in the course of the years. 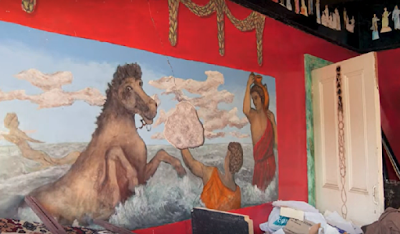 It is not clear when Ron started working on his art environment. He may have been making paintings or working with art in a different way all the years he lived in the house. However, creating the decorations that currently form the art environment, must have been a project of many years.


The images above give an impression of the paintings that have been applied to the walls and the ceilings of almost all rooms in the house, including the bathroom.

There are historical figures such as French emperor Napoleon, British admiral Lord Nelson and his mistress lady Emma Hamilton. A warrior with a shield and sword is given a place on a ceiling.

The murals in the bathroom show a variety of fishes. 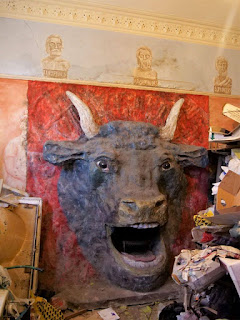 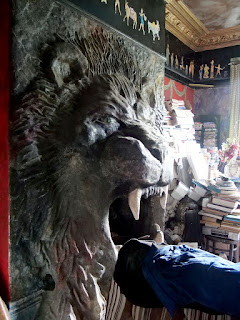 The art environment also includes a number of impressive sculptures.

A chimney has been shaped like a giant bull's head (image left above) and there is a fireplace with a lion's head, three meters tall (image top right). 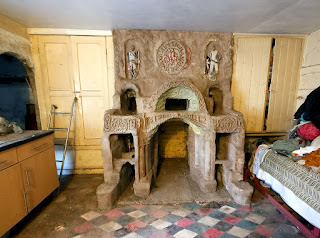 In the kitchen, which hasn't been provided with frescoes, there is a sculpture that looks like a temple.


Taken together, all these decorations exude a classical atmosphere and evoke associations with ancient Rome, Egypt and Greece.

Action to save the site

After Ron Gittins died in September 2019, the family for the very first time got acquainted with the decorations and sculptures in the house. That was a great, very special discovery.

Also because some family members are active in the art world, it was soon established that Gittin's legacy included a special work of art. In the last months of 2019 various experts, who were asked to visit the site and take a look at the decorations, agreed that this was a very interesting ensemble in the field of outsider art.

The social landlord Salisbury Management Services was also approached, and this organization appeared willing to conclude a contract aimed at keeping the house in its current state during the coming period.

In the course of January 2020, the local newspaper Liverpool Echo was approached. This journal published a large article about the discovery of the site, and this news subsequently was taken over by many other British newspapers.

All these activities were mainly undertaken by Jan Williams and her partner Chris Teasdale (Jan is a daughter of Pat Williams, Ron's sister. Jan and Chris together manage their art project The Caravan Gallery)

A crowdfunding campaign to save the site was successfully completed in February 2020. However, in order to consolidate plans to continue Ron's Place, a new campaign has been launched through Patreon to recruit people who want to sponsor the project as patrons.
Documentation
* The official website Ron's Place, with a virtual tour of the decorations in the various rooms
*  On the website The Keepers Project (2020) a variety of pictures and an interview of David Clegg with Jan Williams and Chris Teasdale, keepers of the site
* Article (January 25, 2020) about the discovery of the site in newspaper Liverpool Echo
* A series of pictures of the site on Liverpool Echo