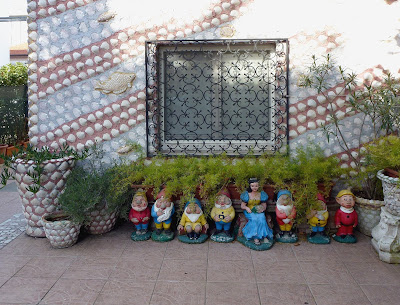 Snow White and the seven dwarfs have found a place at the foot of a wall decorated with shells, part of a house  that is completely covered with shells in San Giuliano a Mare, a hamlet of the municipality of Rimini on the northwest coast of Italy, facing the Adriatic sea.

Alfonso Rinaldi (1901-1983), who was a taxi driver, in the 1960s, when he himself was in his early sixties, decided to realize an artistic dream of decorating his house.

His house is a few minutes' walk from the nearest beach and the availability of shells there makes his choice of shells as the most important decoration material obvious. 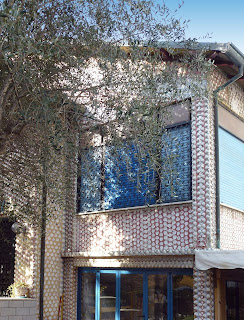 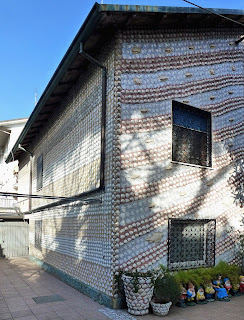 It became a major project that would eventually include all the walls of the house and various smaller objects around it. Rinaldi mainly used shells of mussels and clams, but also a large quantity of scallops.

As the project progressed, it became more and more sympathetic to people from the area, who started helping with collecting shells. Also owners of restaurants in the tourist town that is Rimini contributed shells, presumably mainly the scallops, which are largely part of the decoration.

It has been said in newspapers that Rinaldi has processed around 14.000 shells and that he has worked on the project for about six years. 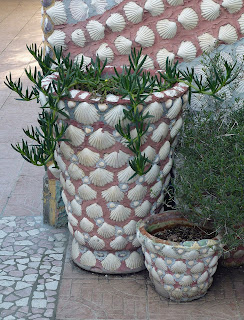 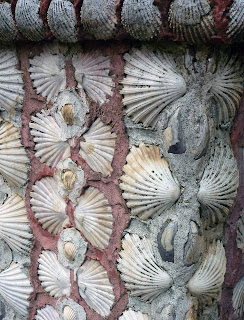 The detailed photos around give a good impression of the pattern Rinaldi used to locate the shells on the substrate. On large surfaces he made long lines, horizontally, vertically, obliquely. depending on the status of the respective wall.

On small objects, such as garden pots (right above), this linearity has apparently disappeared, but looking closely a mixture of horizontal and oblique lines appears.

Also striking is the color scheme of the cement that Rinaldi used to attach the shells, with pink, yellow and light blue shades, for which he made special mortar blends. 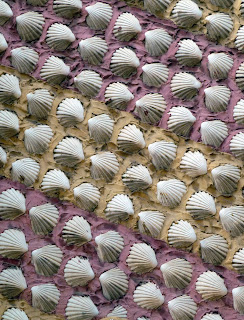 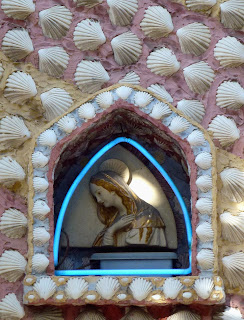 The line patterns on the walls are broken by windows, and to a very limited extent by small decorations, such as the shrine (?) left above and the fish in the image below.

Considering that the decorations were made in the years 1960/70, it is remarkable how good they look even after some fifty years. 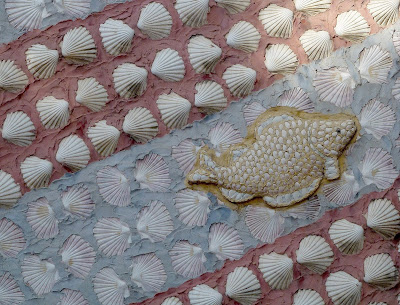 After Rinaldi died in 1983, his daughter inherited the property. In consultation with local authorities it was decided to leave the house in the state as created by Rinaldi.

As the documentation shows, in recent years various news media have paid attention to this art environment, often with similar content.

In these article some foreign examples of creations with shells were often cited, but strangely not the shell decorated property of Marsilio Raggini in Bellaria, some 13 km north of the city of Rimini, 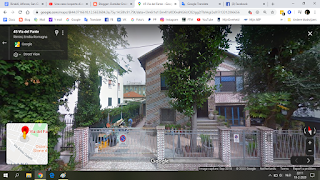