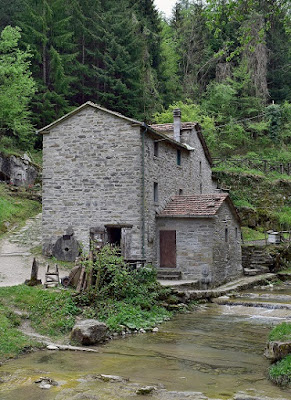 The building pictured above is located near the hamlet of Fiumicello, part of the municipality of Premilcuore, a small community some 65 km south-east of Bologna, Italy.

This building, amidst the wooded and rocky environment of the Parco Nazionale delle Foreste Casentinesi, is a mill which runs on a stream that on the spot has a lot of decline.

The centuries old mill for a long time has been managed by the Mengozzi family, most recently by the brothers Sesto and Domenico Mengozzi. It was well known for its flour of grains, but especially that of chestnuts.

However, due to the declining population in the area, the mill had to close in 1963. But the brothers, who were aware of the historical and cultural value of the mill, succeeded in 1993 getting it back up and running, now as a museum and tourist attraction. 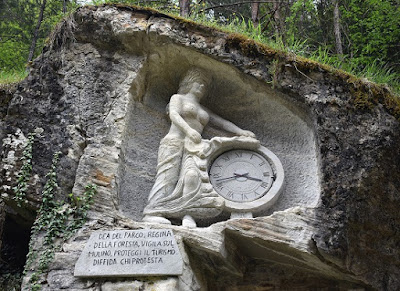 Domenico Mengozzi, the oldest of the two brothers, was probably born in the mid 1930s and passed away in 2006. Besides being a miller, he has become known as a self-taught artist, who made sculptures as a hobby. activities he started  in the early 1960s.

His oeuvre includes stand alone artworks, but also high reliefs in the rocks that surround the mill or are located along the road that leads to Fiumicello. All the creations he has made are located in or around the mill. 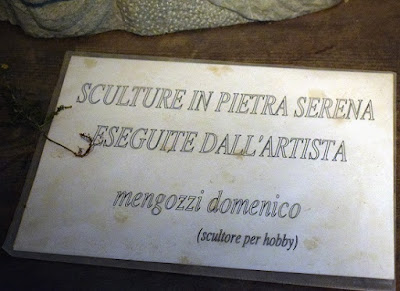 As the text on above plaque says, Mengozzi worked mainly in pietra serena, sandstone that is common in the area surrounding the mill and is typical of the Tuscan-Emilian Apennines.

In the living area on the third floor of the building there are notably smaller creations, such as busts of religious and political figures, a group of small-scale sculptures depicting a nativity scene, chains of different sizes, but also a carved fireplace. 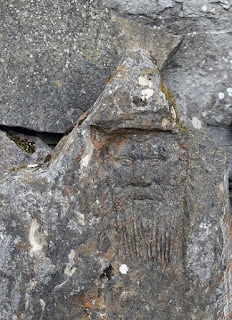 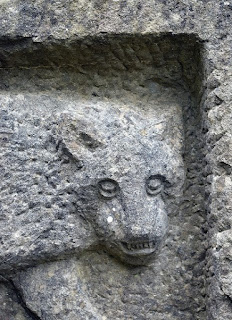 Outside, in the rocky area that surrounds the mill, Domenico Mengozzi has created a variety of sculptures.

Apart from creations such as a fountain or the head of an older gentleman (Domenico's father Ferdinando Mengozzi?), these sculptures are mostly representations of individuals or animals, standing alone and often executed in high relief. 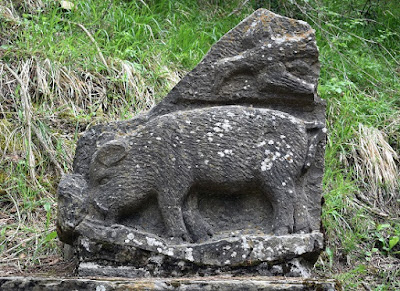 A number of examples can be seen in the photos, such as the lady with the clock (all the way up), a bearded man, an animal head and a sniffing pig (above), a deer with antlers and a sitting lady (below). 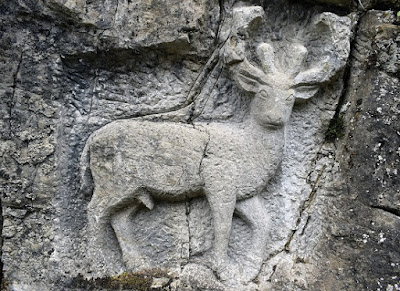 a deer with antlers
a text higher on the rocks says (translated into english): "You who wander
in the forest are happy with that weight on your head"

After the death of Domenico Mengozzi, the mill and its surroundings are maintained by his brother Sesto, who is now in his early eighties, so for him and the next generation the moment might come to consider how the site will continue to be managed in the future. 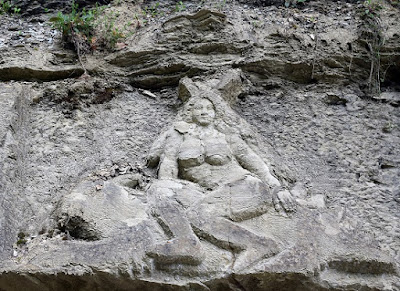 Documentation
* entry on the website of Francesco Galli
* a booklet Fiumicello - Sulle tracce dell'uomo (Fiumicello - On the trail of man) can be bought via the website of the Parco Nazionale del Foreste Casentinesi
* article on the website Inspirock website with travel- and contact details
* article on Facebook (Romagna da Scoprire) with a variety of pictures both about the mill and the sculptures
* Instagram #mulinomengozzi
Video
* a video on Cico's Channel (4'41", YouTube, August 2017), views of the site with a drone

can be visited on Sundays in summer, or on appointment
Google maps 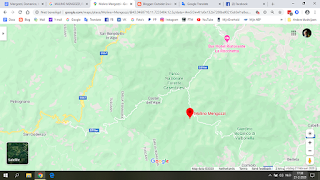 Email ThisBlogThis!Share to TwitterShare to FacebookShare to Pinterest
Labels: display of sculptures made from stone, indoor arrangement of sculptures, rock sculptures