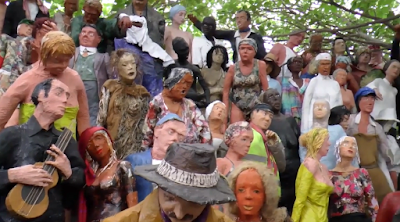 this picture and the next two: screenprints from a video (2017) by Lilian Bathelot
(see documentation) published here in agreement with the maker

These sculptures are the work of the French self-taught artist Joël Bast, who -since he began creating them- lives and works in the midst of his creations. 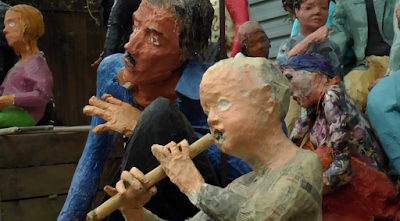 Joël Bast is the artist name of Joël Bastard, who was born in April 1951.  On the internet almost nothing can be found about the first decades of his life. In the 1990s he was a self-taught sculptor who worked in wood and stone.

The story begins in 2000 when Bast decided to stop working in wood and stone, and to start creating life-size personalities made from hexagonal chicken mesh and papier-mâché.

Around the same time a new art festival started in the community of Banne, a small characteristic village in the southern Ardèche area. The yearly festival was entitled Bann'Art, festival d'art singulier, art d'aujourd'hui (Bann'Art, festival of singular and contemporary art).

Bast participated in this Festival with his sculptures, which he referred to as Présences. In July 2016 he was interviewed at the Festival site by Jeanine Rivais, a well known French author about singular art. 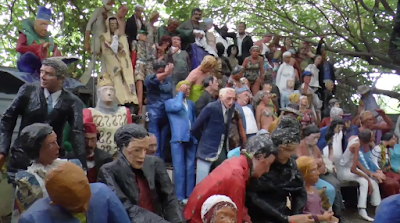 Bast owned a small, colorfully painted caravan, with which he - full of sculptures - could travel to art festivals. There is a report about a trip he made in 2007 to Montmartre, Paris, where he placed his sculptures on sidewalks, benches and other places in the public space, just in the midst of the passing public.

In 2009 Bast settled in the city of Séte, a port and a seaside resort on the Mediterranean in the Hérault department, where he (and his sculptures) got room in a building belonging to the municipality.

Here he continued to work on expanding his collective of sculptures, took part in local art events and put his présences not only on his balcony along the street, but in all kinds of public places in the city. 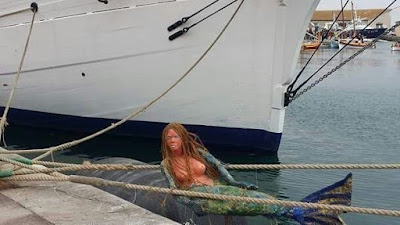 picture via IDHeraultTV (around 2016) of a mermaid in Séte's harbour

In 2016, when Bast had completed some 140 sculptures of personalities, the city informed him that the building where he stayed, was needed for other purposes and he was asked to look for another place.

A petition to find a solution for Bast so he could stay in Séte, signed by some 700 inhabitants of the city, did not change the local authorities' mind and he had to look for another place for himself and his extensive collection of 140 Présences.

After some wanderings, Bast was welcomed by the mayor of the municipality of Grabels, 35 km north-east of Séte, who, in consultation with the city council, offered him living space and a workshop in the Chateau de Grabels, which was bought by the municipality in 2015.

Currently (2020) Bast is still living and working there. 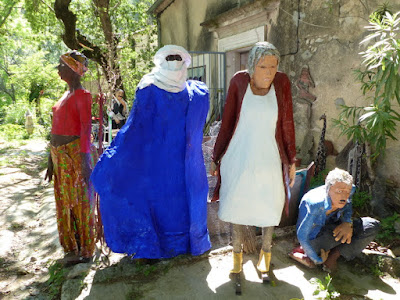 this picture and the next two courtesy of Sophie Lepetit,
from her weblog

The castle is surrounded by a park, where Bast finds space to set up his sculptures, as the photo above shows. At the same time, the sculptures form such a part of everyday life that they are also present in the kitchen, as can be seen in the picture below. 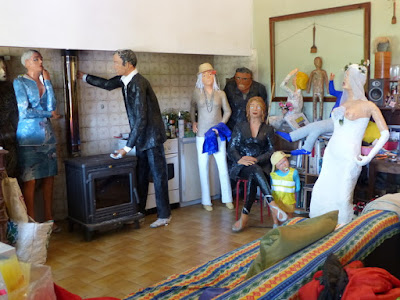 The French word précense reads in English presence, and refers to the situation that something or someone is in a certain place. The plural therefore relates to a number of people, or in this case sculptures, who are in a certain place or situation. With regard to Bast's creations that situation best can be indicated by "normality" or "everydayness".

Just as the material that Bast uses to manufacture his sculptures is rather simple -chicken wire and papier-mâché from old newspapers- the sculptures are a collective of ordinary people engaged with their daily activities. Including young and old, male and female, all with a variety of cultural backgrounds, the collective is a model of mutual tolerance in daily practice.

Some sculptures have been part of the collective for over fifteen years and have become trusted company for Bast. Some of them stay indoors, as if they belong to the family, a situation that can be found more often in the field of art environments, such as with Bogdan Ziętek from Poland, or Valery Ermakov from Ukraine. Some stay in the park, or have been scattered around in the community.

Bast will not sell sculptures that are part of the collective. By exception he may be willing to make a sculpture on order, but preferably the collective comes first. 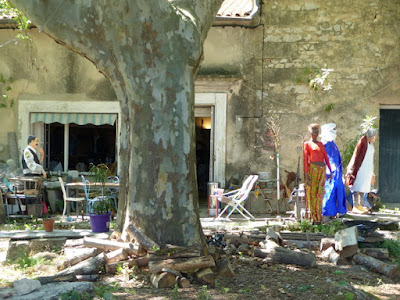 
Joël Bast
Les présences
Chateau de Grabels
Grabels, dept Hérault, region Occitanie, France
the park around the castle can be visited by the public
visits of the interior only on appointment
Posted by henk van es at 6:35 PM

Email ThisBlogThis!Share to TwitterShare to FacebookShare to Pinterest
Labels: indoor arrangement of sculptures, park with a variety of sculptures, scattered art environment, village or town with sculptures