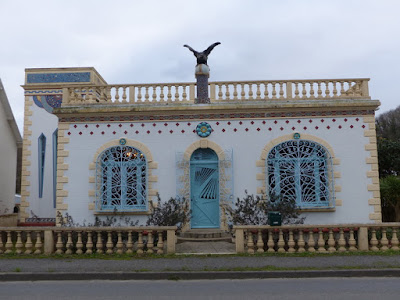 pictures courtesy of Sophie Lepetit,
from her weblog

The house in the picture above is located along the coastal road in St Efflam, a small village, part of the community of Plestin des Grèves, in the Côtes d'Armor region, Brittany, 14 km south-west of Lannion.

This singular architecture was conceived by Raoul Vendôme (1871-1955), who studied to become an engineer. He was involved in the automotive industry and became known in particular as belonging to the first generation of aircraft manufacturers in France. In 1908, for example, he designed and built his first aircraft, a one-person single-decker.

Vendôme also made some inventions in the technical field, such as the perfume atomizer 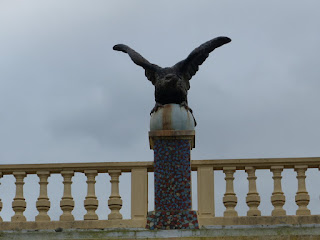 The house presented in this post was built in 1928, when Vendôme was in his late fifties and had probably completed most of his career.

It is certain that he was the one who provided the ideas for its layout, the design and the way of decorating the exterior, but it is unclear whether Vendôme himself was involved in the construction work.

The house was built with reinforced concrete, which was quite new at the time, and it includes a basement, a ground floor with four rooms and above a roof terrace with railings.

Seen from the street on the left there is a tower, which serves as a viewpoint, in French a belvedère. When the house was built, there probably was an unobstructed view of the sea; meanwhile the strip of land along the sea has been partly built up. 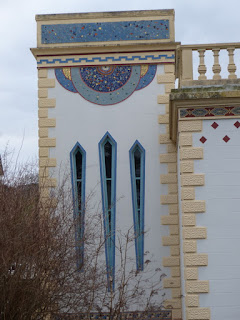 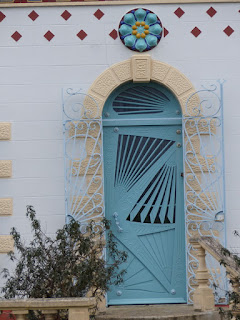 There are also influences from the Middle East, an area where Vendôme made several trips.

The cast iron eagle on top of the building was previously gilded, and is from a pavilion of the 1931 colonial exhibition in Paris. 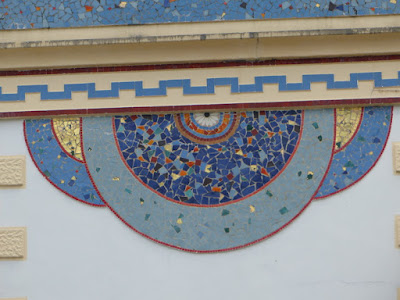 After Vendôme passed away in 1955, the house went on sale. The current owner, the architect Gilbert Petibon, bought the house in 1996.

In 1999 an exhibition of some regional artists took place in the house, which then was open to visitors, but currently has no facilities for public visits.

Documentation
* Entry  (based upon a report from 2004) on the website of the Inventaire du  patrimoine culturel en Bretagne (Inventory of cultural heritage in Brittany)
* Article (January 2019) on the website LesgrigrisdeSophie by Sophie Lepetit
* Article (August 1999) in regional journal Le Télégramme
Video
*  Video by Enocq Daniel (2'39", YouTube, July 2012)