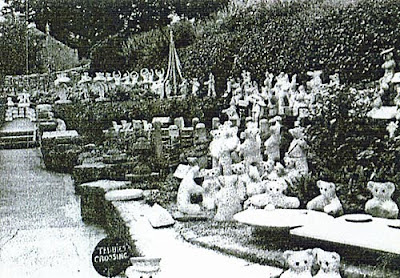 
Although above depicted English art environment with reportedly 300 teddy bears made of cement, disappeared years ago, the house to which the site belonged is currently (2020) still referred to as Teddy Bear Cottage, as can be seen in the screenprint below. 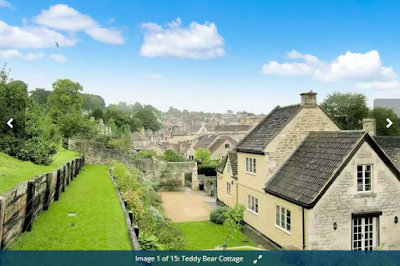 The house, located on 14 Church Street in the town of Bradford-on-Avon, not far from Bristol, in the Wiltshire region in the south-west of England, was bought in 1935 by Charles Edmund Palmer, who was born in 1883 or 1884.

The internet hasn't much biographic information about him. He had a job with British Railways as a line inspector, his wife was Harriet Isabelle Palmer, the couple lived in Bath in the early 1940s, but when because of the war their house was destroyed , they moved in 1942 to the house in Bradford-on-Avon.

After Mr Palmer retired, probably in the late 1940s, he developed a hobby of making teddy bears out of cement, which he grouped together in the garden belonging to the house. Thus arose in the 1950s and 1960s an art environment with hundreds of teddy bears, a site that became known as the Teddy Bear Garden.

The video shows how Mr Palmer puts the cement in a mold and processes it into a bear shape, which is whitewashed after drying.

The sculptures generally have the same appearance, sitting with arms forward, sometimes standing with arms raised. The setup is simple, in a circle, sitting in a row at a table, and sometimes attributes are added, such as a book or a cane. Occasionally a specific scene is depicted, such as a schoolmaster bear teaching some student bears.

As is often the case with art environments. it is the overall picture of the hundreds of white sculptures that gives the site its specific appearance, which in this case is further enhanced by the sloping surface of the installation.

In the 1950s and 1960s the site attracted visitors, mainly from the immediate vicinity.

The end of the Teddy Bear Garden

After Charles Palmer and his wife had died (it's not clear when), their house was for sale. In the 1970s it became part of the office and laboratory of the St Ivel dairying company, which at that time settled in different buildings on Church Street. In the mid 1990s the company left the location and it is likely that he firm in the approximately twenty years it was on Church Street, hasn't cared for the bear garden.

At the time of the departure of the company an employee took four bears with her, because she assumed that the  site would be demolished. The new residents of 14 Church Street have restored seven bears. And maybe other people also have acquired some bears.

Its quite possible that the remaining teddy bears were so battered that demolition of the garden was inevitable.

So some of the site's items may still exist, but the Teddy Bear Garden as such is history.