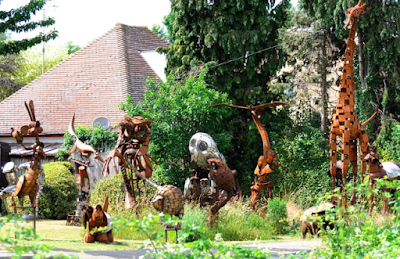 Above pictured art environment in the front yard of a house in the vicinity of the English city of Cambridge could not only be seen from the street, but passers-by could easily enter it because for that purpose the residents of the house had deliberately removed a small hedge between the street and the garden. 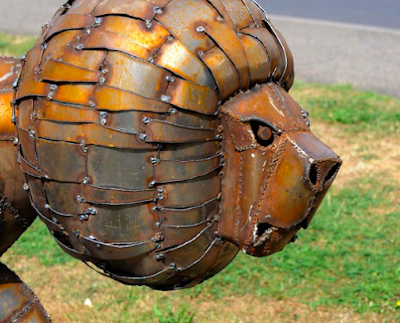 sculpture of a dog

Tony Hillier, who created this art environment, was born in Birmingham in the early 1940s. After his primary education he got a state scholarship to study at Trinity College in Cambridge. After some years he moved to Selwyn College where he ended up as a lecturer of physiology.

In 1968 he married and Joan and Tony would be together for 46 years, until at age 72 Tony died in November 2014, after in December 2013 he got a stroke from which he never recovered. 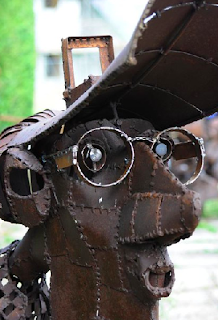 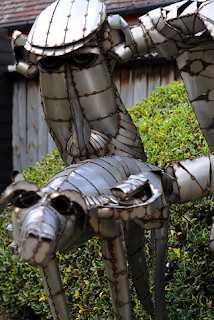 details of Hillier's sculptures, above at the left a dog, at the right a male face

In 1999 when he was in his late fifties, Tony Hillier retired early from his job at Selwyn College.

Now he had more time to be creative.

He had always made paintings, about which almost nothing has been published so far. It was first mentioned by Joan Hillier in an interview she had in 2020 in the context of the Keepersproject (see documentation).

After retiring, Hillier initially focused on making bamboo and paper mache creations (now mostly lost), but then switched to making sheet metal sculptures, an activity that would largely determine the last part of his life.

Hillier made his sculptures from pieces of sheet steel that he welded together in the form he envisioned. His first sculpture started as a cat, then while working turned into a tiger, to end up as a lion.

The lion was given a place in the front garden and stood there alone for some time, but not for long, because Hillier turned out to be a diligent worker and the lion soon got company of other sculptures, mainly depictions of animals, people and fairy-tale characters. 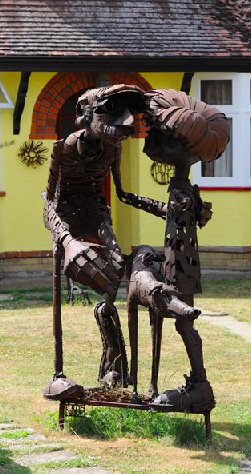 
And so the front yard of Tony and Joan's home in Histon, a village just north of Cambridge, gradually turned into an art environment, a site often referred to as Histon Sculpture Park.

Dominated by a giraffe, tall 22 feet (6.7 meters), the garden includes dogs, owls, pigs, lions, tigers, vultures and some human characters, mostly displayed stand alone, but occasionally also in groups, as in the scene above that (most likely) depicts a father, a son and a dog.

This scene also shows that Hillier's work often has a caricatured slant, such as the boy's large head and narrow neck, and the man's bulky nose and lavish peaked cap. Other sculptures also show that some features are emphasized more strongly, such as feet, eyes and lips. 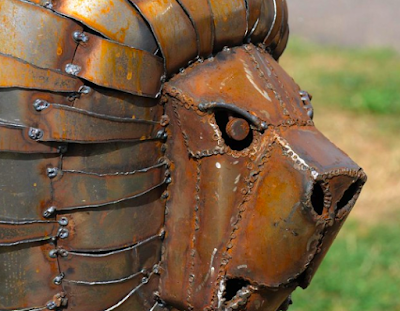 The sculptures also have a cartoonist character to indicate that one does not have to view them reverently, but can simply deal with them.

Thus, children were allowed to climb a large sculpture of a pig, with the record being 11 children at a time ....

And climbing was also the case for a 8 feet (2.4 meter) high sculpture of a horse, and not just for kids, because the photographer who took the photos in this post, at Hillier's insistence had to climb the horse and sit in the saddle before he could leave. 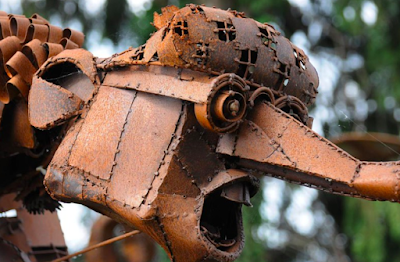 character with a big nose

Although Hillier never wanted to sell his sculptures, he not only made sculptures to decorate the garden, but he also liked to make sculptures to donate to public institutions in the area, especially those institutions concerned with young people or education, like schools and public libraries.

For example, there is a report of a donation to a school in Cambourne due to its tenth anniversary. In September 2009 at the school a man-sized sculpture was revealed of a girl sitting on a chair with a dog looking at the floor with a cockerel and a pig. 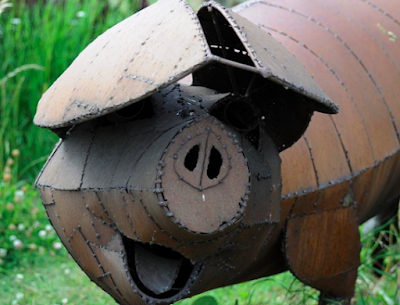 After Tony Hillier died in November 2014, his wife Joan continued to care for the sculpture garden.

In March 2020, Joan announced publicly that in the spirit of her late husband, the sculptures would be given away to public institutions interested in placing them in their location.

A teacher at a primary school in Hardwick responded immediately and obtained three sculptures for the school as well as for the village of Hardwick. 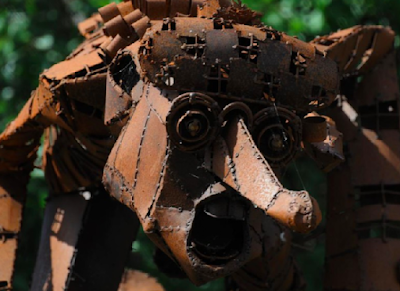 Documentation
* On the internet there is still a reference to the personal website of Tony Hillier; however, this site is no longer available
* In July 2020 a new website was published, entitled The Keepersproject, about people who are engaged in keeping art environments in the UK. The site documents Hillier's Sculpture Garden with a series of pictures and has an interview with Joan Hillier, an interview in which (for the first time) Hillier's paintings are mentioned
* On Gramho a series of pictures of the garden (2019)
* On weblog By Stargoose And Hanglands (January 2018) a short article about the site, with a series of pictures
* Article (October 2014) on BBC Cambridgeshire

site can be seen and freely entered from the road
streetview 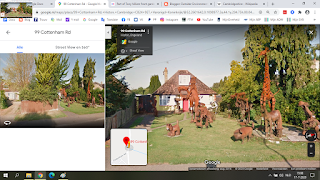