The art environment named La Maison de Blanche Neige (The House of Snow White), located in the commune of Sucé-sur-Erdre, near Nantes in France, is characterized in all its parts - interior decoration,  exterior with structures, characters, paths and vegetation - by the dominance of the rustic approach.
Life and works
For Fernand Bielle-Bidalot, the one who shaped house and garden, this rustic approach is related to his memories of the French Pyrenees where he was born in the early 1930s. Growing up in Lourdes, young Fernand was taught a taste for wood and sculpture by his father, who was a carpenter and a roofer.
Already at the age of seven young Fernand helped his father with the roofing of the dungeon of the Château de Lourdes.
After primary school and a training as a carpenter, he left Lourdes at the age of twenty in the early 1950s.
He was able to join the Compagnons du Tour de France, a professional organization for qualified craftsmen who offer a tour of France to professionals such as carpenters, who can thereby supplement their professional knowledge, become familiar with regional techniques, get to know potential contractors and gain access to additional group education. 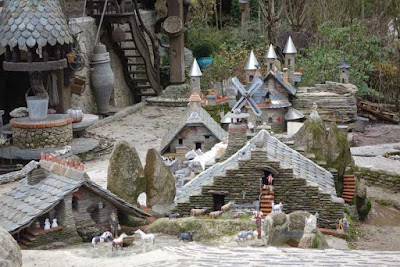 After his tour of France, Bielle probably chose the area around Nantes as his field of activity as a qualified carpenter. He got married and at some point the couple will have moved into the house along Tassin Alley in Sucé-sur-Erdre, that would later become part of Snow White's domain.
Located along the river Erdre, Sucé-sur-Erdre is a community of about 6100 inhabitants, some 20 km north of the center of the city of Nantes,
The living house
An architect was hired for the construction of the house, but it was Bielle-Bidalot who designed the interior in detail, with many wooden elements and specific constructions to achieve the rustic atmosphere that he had in mind.
There is a wooden staircase that winds upwards, the wooden trusses that frame the top of the house can be seen, there is a monumental fireplace with two special niches, the windows with stained glass are reminiscent of nature, and there are decorative elements such as slate sitting dogs.

As the image above shows, the exterior of the house has a rural impression, with a roof with various dormer windows, an eaves with a few semicircular expanses and the side wall with an overhang supported by a heavy horizontal beam at the height of the eaves at the front side.

The area around the house

In the early 1990s, Bielle retired. His wife Josiane continued to work as manager of the café le Santeuil in Nantes, which the couple had previously acquired.

Of course, after the purchase, under the direction of Bielle the premises were redecorated in his rustic, authentic style,  which certainly contributed to the café becoming a popular meeting place for students and journalists. 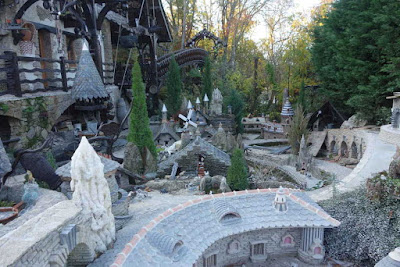 In 1994, when he as in his early 60s, Bielle began changing layout and decoration of the area around the house, which is 3000 m² in size.
The start may have been small-scale, but it soon involved a comprehensive approach aimed at planting trees and shrubs, constructing or renewing footpaths where necessary, installing new structures such as a bridge made of wood, stone elements such as bell towers, masonry walls, and of course decorating specific spots with miniature structures and installations, and with human, animal or fairytale characters.
Indeed, an approach that would keep Bielle busy to this day (2021).
The various images above show that a miniature village has arisen at the front of the residential house. The village, that radiates a Pyrenean atmosphere, has houses, towers, a mill and other elements that characterize village life, and looking closely, one will also see people and animals walking around and miniature trees that grow within the correct scale.
The houses have been made very realistic with ridge caps and pediments, and even cat flaps. The courtyards are paved with stones to scale. 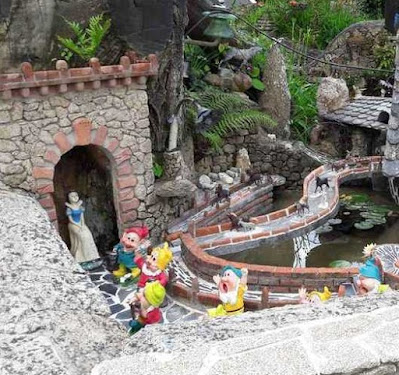 Although Bielle was particularly inspired by the atmosphere of the Pyrenees, he also managed to create a fairytale atmosphere in his art environment.
That also influenced the naming of the site. One of the structures in the garden is dedicated to Snow White and the Seven Dwarfs and since this cottage appears to have the same chubby look as the one in Walt Disney's famous 1937 film, the association was quickly made and this designation has now become  standard.
The picture above and the one below give an impression of  the way the naming characters are depicted in one of the places in the site. However, near the spot in the garden with a view of the river, there are also creations dedicated to Snow White and the dwarfs.
One of the striking characteristics of this art environment is the great diversity of plants and trees that decorate the site.
This planting has been carefully selected by Bielle, especially with regard to the types of trees that should be planted.
These trees, now mature, evoke an atmosphere of unspoiled nature and now offer about fifty different species of birds the opportunity to nest. 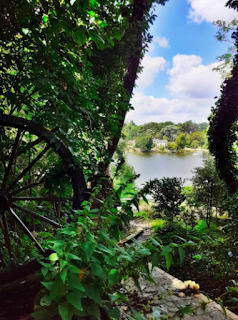 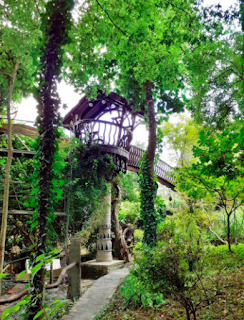 The four images around give an impression of some elements that characterize this art environment.
The top left image shows the view of the river Erdre, a tributary of the river Loire, seen from a viewpoint surrounded by a masonry semicircular wall. Near this viewpoint is a replica of the cottage of the seven dwarfs and there is also a mural of Snow White and the dwarfs.
The image above right shows a slender round tower with a covered vantage point on top. This place can be reached via a staircase from the ground as well as via a small wooden suspension bridge that starts at the rear of the living house.
The two images below show some rustic elements in the middle of the greenery 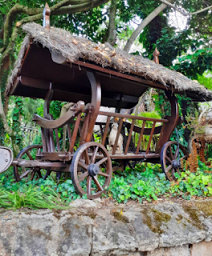 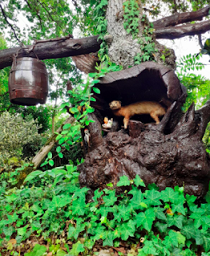 The paths in the garden are also an important image-defining element. With their meandering course and mutual connections, they form a maze that, in a smaller scale version, resembles the Follies Siffait, an art environment located in the same region around Nantes along the Loire, created in the first half of the 19th century and currently still existing
The survival of the site has been arranged
Currently (2021) Fernand Bielle-Bidalot is in his late 80s. His wife Josiane passed away in May 2019. Earlier the couple had already considered the future of art environment and after long deliberation they decided to leave the house and garden to the municipality, a decision that was made public after Josiane's death .
The municipality sees this as a token of confidence and will prepare for an orderly transfer, for example through an inventory by the municipal landscaping service of the trees and plants in the site.
Documentation
* Series of photos on weblog Princesse Pepette (July 2020)
* Entry on weblog Our Little Family ((August 2019), with a series of pictures
* Article in local magazine Au fil de l'Erdre nr 164 (November/December 2018), -p,21
* Article in magazine Jardin et Maison (December 2014), with a series of pictures
* A series of pictures on the website génération-évasion (April 2017)
Videos
* Video by TéléNantes (December 2016, 6"00", YouTube)
* A video entitled La maison la plus insolite de France (2018,  0'57") by Génération-évasion, can not be embedded here; however,the video can be seen on Facebook
Fernand Bielle-Bidalot
La maison Blanche-Neige
55 Ruelle Tassin,
44240 Sucé-sur-Erdre, dept Loire-Atlantique, region Pays de la Loire, France
can partly be seen from the street, visits only on appointment
Posted by henk van es at 4:37 PM