Above image shows an iron sculpture of a colorful character against a background formed by a park landscape with many more such sculptures. Welcome to the Dork Park in the Finnish city of Heinola, some 140 km north-east of Helsinki, where the sculptures of Vesa Väänänen are displayed.
Life and work
Väänänen worked as a sheet metal worker and as a gardener until he became unemployed in the 1990s due to economic developments.
He lived in a former railway house on the edge of the Dork Park in the eastern part of Heinola, also called the Railway Park, because it is adjacent to the railway, which was used for passenger traffic until 1968.
As a sheet metal worker he occasionally made creations from sheet iron that got a place in his house, but when he was unemployed for a while, he decided in 2001 to work more systematically on this.
It became a project that would keep him busy for years to come. So far (March 2021) Väänänen  has created more than a hundred sculptures, which he situated in an open area of Dork park near the house where he lived and had installed his workshop. 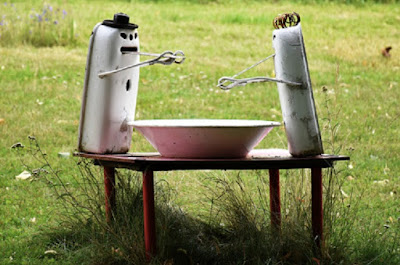 In the course of the following years this park area got filled with predominantly small-scale creations that Väänänen made from all kinds of iron residual material, such as the metal casings of kitchen geysers as in the picture above.
The owner of the park (maybe the railway company) may have had other plans regarding the further development of the area, but these ideas apparently were not very concrete and so the sculpture park was tolerated for the time being, a situation that has existed for about twenty years now (2021).
However, this situation of tolerance has recently changed, as will be seen at the end of this article. 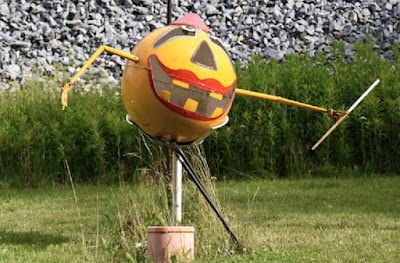 As to the nature of his work, in 2016 Väänänen himself has remarked: Yleensä käytän töissäni myös huumoria, ironiaa ja farssia (Usually I also use humor, irony and farce in my work).
Indeed, this is recognized in reviews of the site included in the documentation below, where it is often noted that Vaänänen's sculptures are cheerful and funny in nature.
They make the visitor smile, which may also be partly due to the humorous character of the captions placed on plates next to the sculptures, such as the one in the photo at the very top, which reads: The miracle of growing teenage mustache.
This artwork is also characterized by the way in which the processed metal base material in the design by Väänänen suddenly takes on a completely different appearance once incorporated into the creation, such as the casings of kitchen geysers that magically become human characters who -sitting at a table- enjoy some food.
The same goes for the items used in the creation pictured below and in a lot of other creations.. 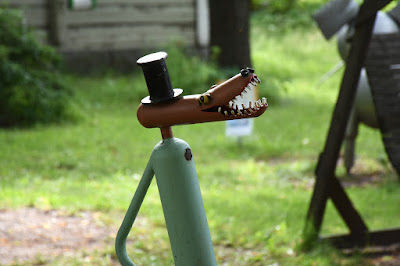 New developments because of a fire in the park
In mid-December 2020, it was reported in the local press that a fire that had hit Vaänänen's house, had rendered the property uninhabitable. Väänänen was injured, but was soon able to leave the hospital.
The question now arose as to how to proceed with the exhibition of sculptures in an area owned by an association that tolerated their use for years, but now retained the right to use the area for other purposes.
Consultations about a solution  -such as eventually another location for the sculptures- have started, talks in which the municipality may also be involved. Results of these talks were not yet known when this article was published in March 2021.
Documentation
* Article (August 2020) on website Ajatusmatkalla, with a series of pictures
* Entry (July 2020) on weblog Marjoin Matkassa, also with a series of pictures
* Entry (August 2013) on weblog Tellunkonstanelamaa, once more with a series of photos
* Review of the site (November 2011) by Erkki Pirtola on website Voima
* Article (July 2009) on website Suomi Tour, with a series of photos
Vesa Väänänen
Park with iron sculptures
Dorkin park (Heinola Railway Park)
Ratakatu 20
18100 Heinola, Päijänne Tavastia region, Southern Finland, Finland
sculptures can be seen in the park
Posted by henk van es at 5:36 PM

Email ThisBlogThis!Share to TwitterShare to FacebookShare to Pinterest
Labels: park with a variety of sculptures, scattered art environment