Located in an ordinary street with ordinary houses, the house pictured above -in the municipality of Artyom (Артём) in Russia- with its exterior wall fully decorated with mosaics has a very special appearance amidst all other buildings.
Behind the wall along the street there is a courtyard and a variety of buildings, all provided with mosaics.
Life and works
Alexey Krivov and his wife Valentina, who created this art environment, both were born in the early 1930s.
Living in the Primorsky area, the most south-eastern region of the Russian Federation, bordering the Sea of Japan¹, Alexey became a plasterer and painter, while Valentina gained considerable experience as a decorator.
When they both retired in the 1990s, they bought an old house in the community of Artyom, a community of some 100.000 inhabitants, 40 km north-west of Vladivostok.
Their new accommodation needed a lot of repair and since Alexey and Valentina both had a lot of experience with doing such jobs, they decided to undertake the renovation of the house themselves.
And because Valentina was also a lover of making decorations, it did not stop at refurbishing the house, but it became a project aimed at beautifying the house and its immediate surroundings with mosaics.
During the project, new built structures were also added (and decorated with mosaics of course...)
The couple did the practical work together, but Valentina was the one who developed the design of the decorations.
Old discarded plates and tiles were used to compose the decorations and once their project locally became better known, neighbors and other residents helped to collect this basic material from all over the city.
Applying the pieces of mosaic required a lot of cement. The couple bought this material from their retirement benefits, which sometimes included that considerable savings had to be made on other expenses. 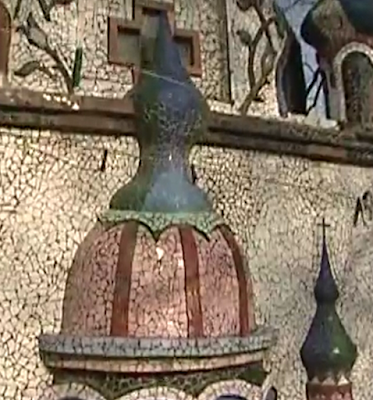 the photo above together with the one below
give an impression of a creation on a wall along the courtyard,
below a protruding space protected by columns, surmounted by a semi-dome. 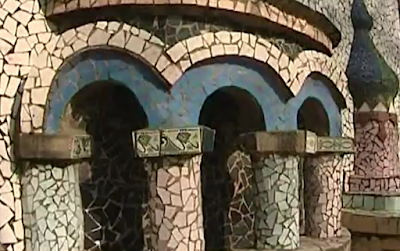 Seen from the street, the art environment is bordered by an exterior wall, predominantly decorated with white mosaic. The wall features black-tinted mosaic images of cranes and swans.
A door in this wall, incorporated into a mosaic corridor, gives access to the courtyard. Along this centrally located courtyard, which is paved with colorful tiles, the living house and the other built structures are arranged.
Located in the middle of the courtyard, the living house has an exterior wall covered with white and light blue mosaic, embellished with some black two-headed eagles. In its interior, which cannot be entered by visitors of the site, most wooden furniture has been handcrafted by Valentina, which also applies to the scenes executed in embroidery, which are attached to the wall like paintings (some pictures here).
On the left side of the courtyard (as seen from he street) is a partially walled semicircular space bordered by some three tower-shaped structures crowned with all together some nine round or four-sided spiers.
On the part to the right of the courtyard there are also a number of towering buildings with openwork arches. With their spherical spiers they have the specific architecture that characterizes Russian churches. Some parts of the structures are provided with (mosaic) images of saints. 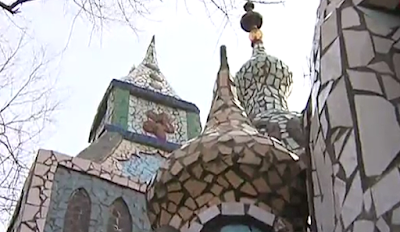 In Russia this site is often referred to as a fairytale house.
Seen from the field of art environments, because of the abundance of mosaics added to a living house, adjacent structures and the exterior area, there is a strong association with the Maison Picassiette by Raymond Isidore and the Maison de la vaisselle cassée by Robert Vasseur, both located in France.
This is all the more appealing, because there is just one other mosaic decorated art environment in Russia, the mosaic house by Egor Zolotarev, which by the way implies more of a form of singular architecture. 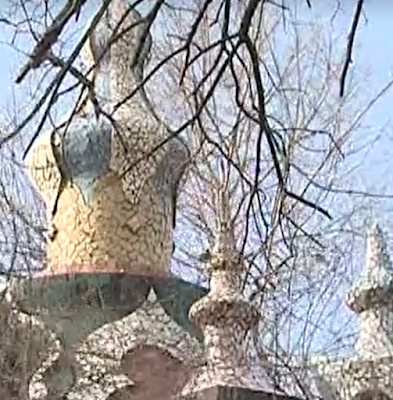 After more than fifteen years of work on the project, around 2011, the art environment had acquired such a size and allure that it got attention in the Russian press, social media and other news outlets. In 2011 and 2012 a number of reviews were published, mostly in the same terms. Subsequent publications, including the article in this weblog, are based on the data published in 2011/12.
Alexey and Valentina Krivov, who created this art environment, must now (2020/21) be in their late eighties or early nineties, but on the internet there is no information available about them and the current state of their art environment.
Documentation
* Article (September 2011) on Life Journal, with some pictures
* Article (October 2011) on weblog Kulturologia, with a number of pictures
* Article (July 2012) on weblog Mosaic Hobby, with some pictures
* Article (October 2012) in newspaper Primamedia, with a large series of photos of he site
* Article (October 2012) on the website of the Alliance of first builders
* Article (January 2016) on sam.mirtesen weblog
Video
* Video (2'20", November 2012) by Russian TV, Channel 5
note
¹  Characteristic art environments located in the Asian part of Russia, are included in this weblog to provide a balanced and coherent picture of the whole field of Russian art environments.
Alexey and Valentina Krivov
Mosaic decorated house
Ulitsa Papanina 49
Artyom, Primorsky region, Russia
can be seen from the street
streetview
Posted by henk van es at 7:36 PM