Located in the small hamlet of Kvashino in the Voronezh region in the westernmost part of Russia,  bordering Ukraine, this unassuming art environment is liked by Kvashino's some 400 inhabitants and referred to as Paradise.
The house and its garden have been decorated by Galina Moiseeva.
Life and work
Galina, who was born probably in the 1950s, has fond memories of her childhood. which she spent in the village of Yurla in the Perm region of the Urals.
Her mother worked as a math teacher and was a very good singer. She loved to sew and made the children's clothes herself. Her father had a small shoe factory, and so his children always wore brand new boots. And he loved to draw, a hobby he may have passed on to Galina.
Galina was educated in preschool education and worked first as an employee, later as head of a day care center for children.
She got married and had four children. But the marriage did not go well and when she learned that milkmaids were needed in the Voronezh region for a good salary and also a house, she left her husband -probably in the late 1980s- and took the train east with her children.
Galina got the job and a house. After some time she met Gennady, they married around 1990 and settled in the house in Kvashino. In 2017, when she was interviewed by a regional newspaper, she said that she at that time had shared life with Gennady for some 27 years. 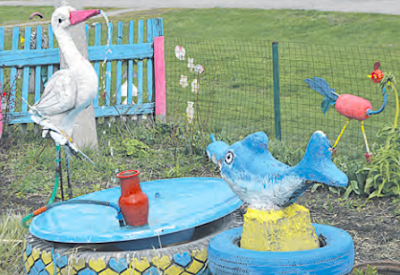 Galina, who is now retired, uses all kinds of surplus and cheap material to decorate the garden, such as old car tires, pieces of foam rubber, old garden hoses and pieces of cloth. She also uses polystyrene, a cheap material.
Her husband enthusiastically helps, for example with sawing pieces of wood. But all ideas for the decorations come from Galina.
The image above shows a self-made fountain with a stork on high legs and a dolphin, an arrangement with many light blue hues. Behind the mesh fence is a styrofoam rooster in red boots.
The second image seen from the top shows a horse with a body made from an old car tire, a wooden muzzle and curled mane. The horse is driven by a gypsy woman dressed in a red long skirt and a black sweater made by Galina. The face of the woman is made of foam rubber. 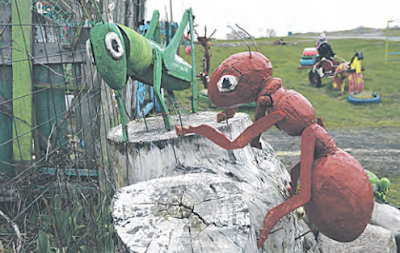 In the image above, the tree stump is being examined by a grasshopper and an ant, both made from wood.

The house where Galina and Gennady live (Galina's children have since left the house, partly gone back to Perm) has decorations, sometimes colorful, of carvings and wooden ornaments, as well as a frescoe with two swans.

There is a homemade weather vane on the house. The wooden bench in front of the house has decorative carvings, again including two white swans facing each other. 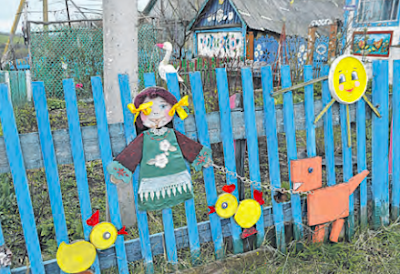 As the documentation below shows, there is only one source available on the internet with information about the art environment, a newspaper article from 2017. In the absence of more up-to-date information, it is unclear what the current situation (2021) is of this site.
Documentation
* Article by Elena Bardakova in regional magazine VOROB (May 2017), -p. 5
Galina Moiseeva
Paradise (decorated house and garden)
ulitsa Chkalo
Kvashino, Voronezh region,  Russia
can be seen from he street
Posted by henk van es at 7:36 PM