A characteristic of many non-professional creators of art environments is that once they have started transforming their home or garden into an art work, they find it difficult to stop. Some go on for decades, indeed.
When it comes to a creation outdoors, finding space is usually not a problem, but indoors it can be different. This might also apply to the art environment reviewed in this post.
Life and works
Alexander Nikolaevich Lovyagin, a resident of the city of Belgorod in Russia, lives in a small apartment with his wife.
The internet has only limited biographical information about him. He was probably born in the early 1950s. There is a newspaper article from 2015, mentioned in the documentation below, that states he was a crane operator, but had to quit that job in the early 2000s due to a heart attack.
Lovyagin then focused on making woodcarvings, an activity in which he had no experience, but in which he gradually became proficient. 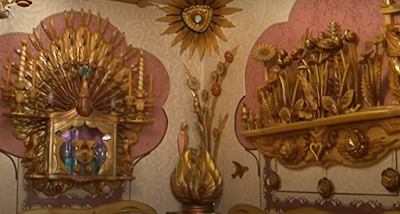 Over the past twenty years or so he has made a large number of sculptures, perhaps more than a thousand.
The pictures in his post show how he the small apartment gradually has become quite filled with creations.
They also show that his artwork mainly includes small-scale items, but then, manufacturing such a lot of small creations remains quite an undertaking.
The sculptures created by Lovyagin are set up in cabinets along the wall in the living room, are mounted on wall boards, or are set up on a small table or other pieces of furniture.
The image above shows that the carvings also decorate the ceilings, where the lighting is incorporated in wooden ornaments. 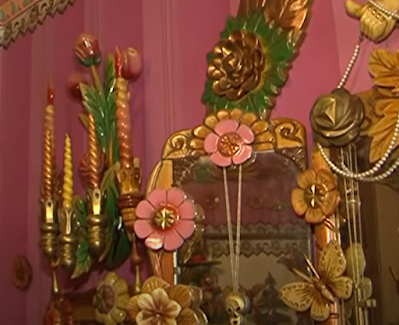 The aforementioned newspaper article also reports that Lovyagin would have preferred to become a pilot, but that things turned out differently.
In the collection there are also sculptures of planes. In the video below, Lovyagin shows a globe made by him, surrounded by spherical celestial bodies, while the holder in which the globe is contained ends in a stylized rocket.
The sculptures of birds, planes and even rockets can be associated with the desire Lovyagin must have had from childhood to fly freely through the air as a pilot. 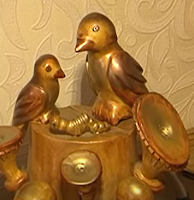 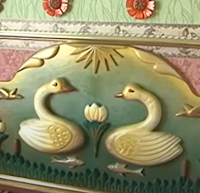 The picture above left shows two swans in a pond -designed in high-relief-  looking at each other, a decorative element much used in Russia. These swans decorate the headboard of the matrimonial bed in the bedroom.
The picture above right shows a few small birds, arranged on a stool
Lovyagin's site in the context of art environments in Europe
As far as is currently known, there are only a limited number of art environments in Europe in the quality of an indoor arrangement of sculptures in a private house.
Most comparable to the arrangement reviewed here, is the site of José Leitao (1938-2020) from France, who displayed an extensive collection of wooden sculptures in the small garage at his house, which functioned as his studio. Bogdan Ziętek (1932-2018) from Ukraine had a large collection of life-size sculptures of mainly female characters in his living room. Kate Bradbury (b. 1961), England, has an extensive collection of life-size sculptures in her London apartment. The House of Dreams Museum by Stephen Wright (b. 1954) in East-Dulwich, London, has both an interior and an exterior completely filled with mosaic sculptures, dolls and other items.
And the modest house of Margarita Travkina (born early 1940s) of Kolomna in Russia houses a collection of about 13,000 dolls, all neatly dressed by her (of course, dolls can also be seen as belonging to another category of creations).
Documentation
* Article (October 2015) in regional newspaper Mir Belogorya
Video
* Video on the YouTube channel of above newspaper
first published April 2021
Alexander Lovyagin
Indoor arrangement of sculptures
Belgorod, Belgorod region, Russia
no public visits
Posted by henk van es at 7:36 PM