Arendsee, a community of some 6700 inhabitants in Germany, was home to a singular architecture and sculpture garden that was single-handedly built in the first decades of the 20th century by Gustaf Nagel, a preacher and naturopath.
Life and works
Gustaf Nagel was born in a well to do family on March 28, 1874 in Werben along he Elbe River, a community some 40 km east of Arendsee. His father was a merchant, and when he was 14 years old young Gustaf started an education to become a merchant too. After some time he had to stop because of serious health complaints, from which he only recovered after he had been treated in 1892 by the naturopath Kneipp (1821-1897).
He was now 18 years old and apparently impressed by his recovery from Kneipp's naturopathy, he changed his lifestyle, started to walk barefoot, let his hair and beard grow out, and dressed in a long robe or loincloth. In 1894 he also became a vegetarian.
Nagel subsequently developed into an expert in the field of natural life. He traveled around Germany to spread his message as a preacher and to sell his writings at meetings that often attracted a lot of interested people.
His lifestyle and message was not appreciated by everyone and in August 1900, when he was 26 years old, the Arendsee District Court declared him incapacitated for work.
Nagel's wandering years came to a head when he visited Jerusalem in 1903. In the same year he succeeded in obtaining judicial annulment of his incapacity.
In 1904 he married Marie Konhäuser. During the marriage, that lasted until 1907, a son was born who was not recognized by Nagel.
In 1910 Nagel's traveling period ended and from the income he had earned during that period he bought a piece of land in the community of Arendsee, a site along the lake from which the community takes is name.
Creating Paradise Garden
Starting in 1910, Nagel would for about 20 years be active in transforming the site into a spot where like-minded people in terms of life- and world view. would feel welcome.
In doing so, he did not work functionally, but allowed himself to be guided by his way of thinking and feeling.
This appears from one of the first creations he took up, referred to by him as Sailor's Grave, a memorial with a cross, a heart and an anchor as symbols of faith, love and hope, surrounded by a fence made of birch trunks. This creation was ceremonially inaugurated on July 10, 1910.
The image below shows that this simple monument still exists today, albeit somewhat battered.
Also one of the first projects was a simple barrack to live in, first alone and from 1912 with his second wife Johanna Raith and later three children (the marriage would fail in 1926).
One of the larger projects was the Temple, now in ruins. Its construction started in 1917.The very first photo shows that the building was located along the lake, close to the jetty with four columns shaped to express fertility and a baptismal font. The temple stands on seven comparable columns. Because the windows of the temple had different colors of glass, visitors could see the lake in different shades.
Under the temple was a cave made of cement and boulders. In the cave was a picture of Otto von Bismarck (1815-1898), the statesman who in 1871 brought about the unity of German states and was Germany's first chancellor for almost twenty years. An inscription above his head read Fear God.
There was also an image of the eternal fire in hell, made of red serrated metal strips surrounded by pieces of charcoal. The top was decorated with angelic heads and an inscription at the bottom said Be German. 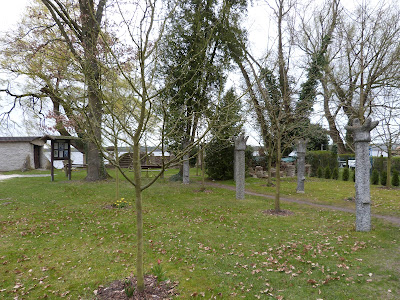 In addition to the temple, Nagel also built other accommodations, such as a Spa hall, with spaces for taking bubble baths and facilities for taking a sun bath. He made a building that provided space for a harmonium and he also made a shelter for the swans that resided in the lake. On the premises there was a stall where homemade juices and other natural products were offered for consumption.
The grounds of Paradise Garden featured various decorative items such as seating areas, a sculpture of Jesus and as main items a number of standing columns, which currently still exist  as shown in the image above.
In the 1920s the site became a huge success
After a somewhat hesitant start, Paradise Garden became a great success, especially in the 1920s, with thousands of visitors every year, who came from all over Germany. The Garden had become kind of a pilgrimage site.
The residents of Arendsee were divided about Paradise Garden. Some had problems with Nagel's views and lifestyle, others valued him as at times the city's largest taxpayer.
This divide became apparent when Nagel in he late 1920s submitted a plan to the local authorities to build a Cure Hall. The authorities initially responded with a construction freeze, but after a petition from a group of citizens pointing out the income from tourism and the benefits for the municipal finances thanks to the Garden, the building permit was granted.
Built on a steep bank of the lake, the Kursaal (Cure Hall) was a polygonal building, made from brick with on the edges pillars made from concrete.
The building was inaugurated Christmas 1930. As the image above shows, it currently still exists.
The site can be classified as an art environment
Overlooking the style of the various buildings, in German reviews of the site described as small organic architecture, and the various sculptural items in the exterior, the site can be classified as an art environment in the quality of singular architecture in a sculpture garden.
A classification as art environment will not easily be made in Germany itself, because this country has such a small number of such sites that here this type of artistic creation in general is not seen as a phenomenon in its own right.
Seen from a broader European perspective, the classification is obvious. There are also some striking similarities between Gustav Nagel and a self-taught artist working in Spain, namely Manfred Gnädinger (1936-2002), who created an art environment at the edge of the ocean in a Spanish coastal town.
Both men were of German origin, had a vegetarian lifestyle, were scantily dressed (Gnädinger walked around in just a loincloth) and lived in a self-built cabin. Both decorated the outdoor space with stone sculptures, the only difference being that Nagel made columns and Gnädinger made creations from stacked stones. 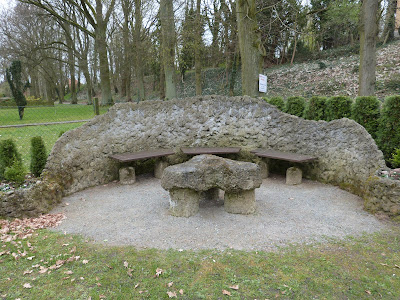 The political developments in Germany in the 1930s did not leave Nagel untouched.  In the propagation of his vision of human existence, political questions were not avoided. On the contrary, already in 1924 Nagel had founded a political party, the Deutsch-kristliche mittelstands-Volksspartei (German-Christian Middle-Class People's-Party), which took part in the elections of the German parliament, incidentally with little result.

In the parliamentary elections in 1933, the year in which Hitler took power, the majority of the inhabitants of Arendsee voted for his party, the NSDAP.

From the moment Hitler came to power, Nagel was critical of his politics, especially with regard to the persecution of Jews. In 1938, Nagels books were banned. In 1940 Paradise Garden was closed for the public and in the night of 15 to 16 July 1942, members of a youth association related to the NSDAP destroyed the interior of the Temple and the Harmonium building.

From 1938 until 1941 Nagel was married for the third time. This marriage ended in lawsuits by both parties. In 1943 Nagel was locked up in the Dachau concentration camp, from which he after some time was released because of an intervention by a lieutenant from Arendsee who informed his superior general that Nagel's sons were fighting at the front during the war. The general agreed that such a man should not be in a concentration camp and got Nagel out of it.

After the war, Nagel was recognized as an anti-fascist, but subsequently he spoke out publicly against the partition of Germany, with Arendsee becoming part of the Soviet-Russian zone of occupation.

When he invited the inhabitants of Arendsee to attend the coronation of a German king, a ceremony that he himself had arranged by way of protest, the Soviet-Russian authorities were not amused. As a result, in September 1950 at the age of 76 by order of these authorities he was forcibly included in a psychiatric institution.

His request to spend the last of his old age in his accommodation in the Paradise Garden was not honored and he died, mentally broken and lonely, in the institution on February 15, 1952.  His son arranged that his body was transported to Arendsee, where he was buried in the local cemetery 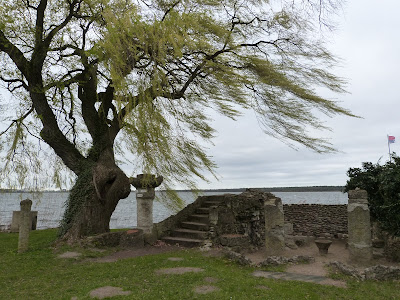 Nagel's heirs waived their rights to the site. For some time the city took care of the site and today (2021) the site is managed by the gustaf nagel förderferein ef, which was founded in 1999. It now is kind of a public park and can be visited freely.

In 1999 it was 125 years ago that Nagel was born. The German Vegetarian Association organized a memorial meeting where a number of speakers discussed the importance of Nagel in the light of current insights (see the article by Margarete Hille in the documentation) 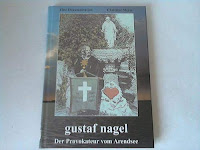 * Christine Meyer, Gustaf Nagel. Der Provokateur vom Arendsee (Märkischer Kunst- und Heimatverlag), Poritz, 2001
* A series of photos of the Paradise Garden by Marcus O. Bst on Flickr
* An article (September 2021) by Marcus Obst with a variety of images of the site
Videos
* A short impression of the site by videoformer (0'46", YouTube, 2015)

Email ThisBlogThis!Share to TwitterShare to FacebookShare to Pinterest
Labels: decorated garden, display of sculptures made from stone, singular architecture