Of the four art environments in Scotland described in this weblog, included the one presented in this post, three are characterized by their proximity to the sea and their decorations with shells.

In addition to Shelleen, reviewed here, the two other sites are a still existing house in Anstruther, decorated with shells by Alex Batchelor in the 1840s, and a site in Leven that has now disappeared except for a few decorated walls, made in the 1920s by William R. Bisset.

The fourth site in Scotland is the Trail of wooden sculptures in the Cairngorms National Park, created by Frank Bruce, opened in November 2007. 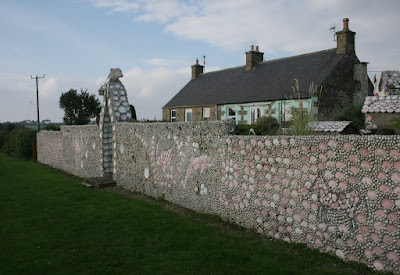 The site named Shelleen is located in Clochan, a small community in Scotland, some 2.4 miles (3,8 km) south of the Moray Firth, an inlet of the North Sea.
Photos of this art environment -mainly presenting the decorated garden wall- are available on the internet, but reviews of the site are lacking so far. This implies that this post cannot mention who made this art environment and in which year creating the site started.
There is a photo on the internet with a caption that assumes that the creation of the site began in 2000, but it is not clear what this is based on.
Anyway, the creation as such is impressive enough to appeal to a wide audience 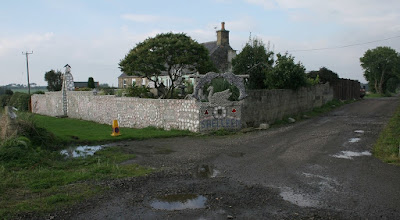 Coming from the village of Clochan the site is to the left of the road, where a man-high wall is situated, for a part at right angles to the road, for another part parallel to the road.
Behind the wall are the garden with various shell decorated creations and the living house with accompanying sheds and work spaces.
The walls along the garden
As can be seen in the very first photo, at the spot where the sides of the garden walls meet, a flattened piece of wall has -below some small-scale decorative items- the name of the site in blue letters: SHELLEEN.
The top of this piece of wall is decorated with sculptures, a swan and two dolphins that are looking up at each other. 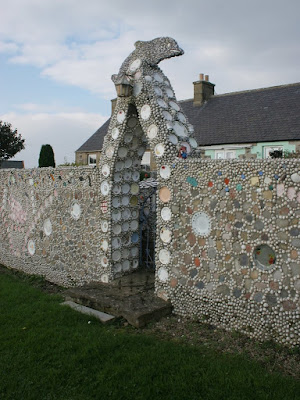 As can be seen in the picture above, the wall in front of the house at its left end has an entrance gate, which has been decorated with a variety of dinner plates and at the top there once more is a dolphin.
This wall as such is richly decorated with shells, including a large number of pink St Jacob shells.
There are also a number of specific decorations, as shown in the two detailed pictures below.

On the left an image of what presumably once more is a dolphin, apparently a favorite item of the person who made these creations, and on the right a depiction of a four-legged animal, perhaps a horse.
The image below gives an another impression of the varied way the wall has been decorated.
The wall along the street is not decorated with shells. It's made of stone slabs and it turns into a wooden fence, which continues in a number of sheds at the rear of the house.
One of these side buildings is decorated with shells, as shown above.
The decorations in the garden
The internet only has a limited visual documentation of the creations in the garden.
On Instagram (#shelleen) there is a series of photos, mainly of the decorations on the wall around the garden and a few of the decorations in the garden, such as a mill with four blades and a church with a spire.
As can be seen in the picture above, this church is just behind the intersection of the two garden walls with the rising dolphins. 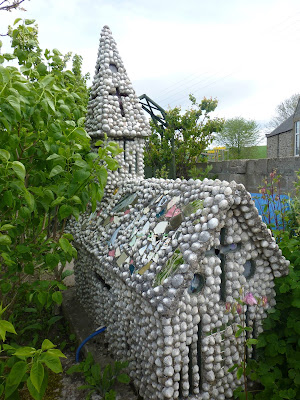 The image above depicts the church, constructed with a decorated gable roof, and both a spire and rear wall bearing a cross.
Although the photo above is not so clear, one can still see that the garden is enriched with an ensemble of houses and other buildings, all small scale, a kind of miniature village situated around a miniature lake, everything in the middle of a rich green decor of trees and plants
It's a pity that better images of the creations in the garden are not available, because it seems that this may mean that an interesting and nicely shaped part of this Scottish art environment will remain in the unknown.
Documentation
* Series of photos with explanation on weblog Last Alliance Studios (scroll all the way down)
Shelleen
Shell decorated property
Clochan, Scotland, UK
can partly be seen from the street
streetview