The small town of Valence d'Agen, a community with about 5,000 inhabitants in the south of France, can feel happy that an exceptionally colorful art environment was begun the past year (2020) , a year that was also characterized by a pandemic which brought a lot of grief and limitations. It is a site created with the aim to propagate Bonheur (Happiness) ...
Life and work
The site is being developed by a female artist in the field of what in France is referred to as art singulier.  She calls herself Kahl, which is a pseudonym formed by a number of letters of her real name.
two videos showing mobile creations
Born in 1965 in Troyes, in the north east of France, it was not obvious that she would work in a creative setting, and initially, because of her studies, she had very different work, such as activities in the fields of communication and the education of children.
However, she began to feel more and more that there was another direction ahead for her, more artistic, and especially in the direction of art singulier. 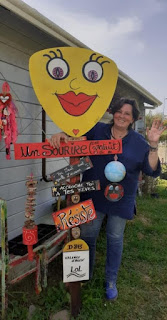 As she said: Mon parcours de vie m'a guidé sur ce chemin que je n'envisageais pas et voilà ... C'était écrit quelque part ....(My life journey has guided me on this path that I did not envision and here it is ... It was written somewhere ....)
She overcame a disease and after great efforts and thanks to a strong character she felt reborn, able to take a New Beautiful Color Path. 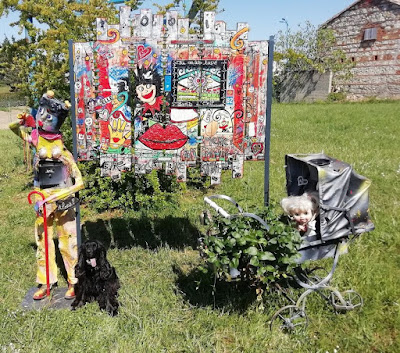 In the late 1990s she moved from Troyes to La Rochelle, on the French west coast. There she opened a small art gallery, where she sold works of art singular artists.
She started painting herself and signed her paintings with the pseudonym KAHL. And then, it turned out that many people, not knowing that Kahl was the owner of the gallery, were interested in her paintings which they valued as attractive work full of color, made by an artist with a distinctly feminine palette.
Stimulated by the apparent appreciation of her work by visitors to the gallery, Kahl began to give painting an important place in her life. She participated in exhibitions and the appreciation of her work continued unabated. It was also a nice experience that the characterization feminine palette  turned out to be correct when, for example, at awards ceremonies after participating exhibitions, she publicly announced that she was the artist named Kahl.
In 2008 she was awarded the first prize in La Rochelle's Festival d'Art. 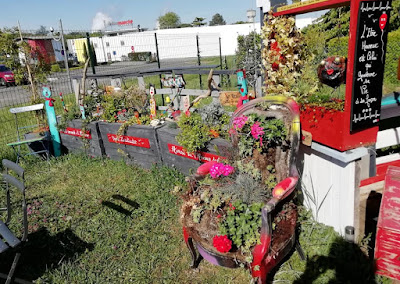 Move to the area of Tarn et Garonne
In 2010, Kahl moved from La Rochelle to the Tarn et Garonne region, an area in the south of France she had met many years earlier while on holiday. She went to live in Bardigues, a community about 10 kilometers south of Valence d'Agen, where she later would establish the art environment that ultimately gave rise to her presence in this weblog.
She became a well-known artist in the area, which she crossed with a van full of paintings, her own work and that of others, to sell at markets in various villages and towns around.
In 2017, she had to temporarily interrupt her busy work to undergo surgery because of a cardio problem and a back ailment, but after that rest she was able to quickly return to her places in markets and in the art trade.
In many places in the region she also was active in giving painting lessons, especially to children, in participating in exhibitions and with the sale of paintings in art galleries, the latter for example from May 2019 in the Galerie d Art Singulier on the Rue Notre Dame nr 1 in Valence d'Agen.
Then, in early 2020, she took a new step in her development as an artist. She left the gallery and moved into new accommodation.
This new accommodation was a free-standing building in the style of a chalet, situated on a generously sized lawn in the vicinity of a McDonald's in Valence d'Agen.
The walls in the interior of the chalet are fully occupied by Kahl's paintings, and maybe also those of other artists, just as was the case in the galleries she managed.
It is the outdoor space where the difference with the past manifests itself. 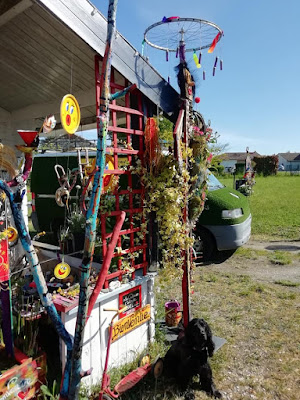 The images in this post show that now also large-scale creations, often more than man-sized, have become part of Kahl's creative activities.
Some of these rising creations represent more or less human characters, others consist of colorful poles with a wheel placed horizontally at the top, and they all have a cheerful appearance, full of bright colors, smiling faces, whatever,  and in any case they are composed of recycled material (Récup, in French).
In addition, many of the creations have a lively character, with elements that move up and down in the wind, rotate or they move as its suits.
The outside space, where Kahl's green-decorated van has a place too, now also includes items such as flower boxes, a decorated chair, panels with texts ...
It is almost unbelievable to see how, in about a year's time, an ordinary piece of grassland has turned into an attractive, cheerful and happiness-radiating art environment where visitors are welcome. 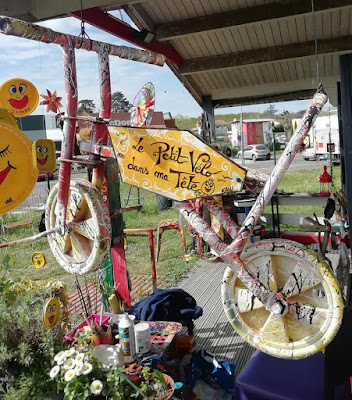 Documentation
* Kahl's website (with pictures of her paintings and the creations in the garden)
* Kahl's page on Facebook
Kahl
Enchanted Chalet
rue du Cluzel
82400 Valence d'Agen, dept Tarn et Garonne, region Occitanie
can be seen from the street and can be visited
visiting hours 10-12.30 and 15.30-17.30
streetview (2016)
Posted by henk van es at 4:25 PM