Located in the extreme east of the Crimean peninsula, the city of Kerch is dominated by a 90 meter high legendary hill called Mithridates. At the foot of that hill, in Rybakova Street, was a building with remarkable decorations, the house of Viktor Fedorovych Golovnya, who was born in the mid 1940s.
It is very unfortunate that this article about the site has to be written in the past tense. This because in December 2020 the house was badly damaged by fire. This happened just two and a half years after the site in May 2018 -probably for the first time- was reviewed in the local press and featured in a video.
Luckily Golovnya survived the fire. But it is not clear where he lives, now that the house has become uninhabitable.
Life and works
Probably retired, Golovnya when he was interviewed in 2018 lived alone in the house. His three daughters already had left home and his wife probably had passed away, in any case she was not present at the interview.
In his working life Golovnya kept sheep, which he let roam on a part of the Mithridates hill behind his house. When he wanted to expand his sheep farm and build new stables, he did not get permission from the authorities that managed the hill.
On the contrary, to protect the classic allure of Mithridates, by court order he had to end the sheep farming and he was only allowed to use the house and keep a small number of sheep in a stable.
The now burned-down house was built by Golovnya himself.
Self-building is often a labor-intensive affair and especially now that the house was quite large and, for example, also included bedrooms for each of the three daughters, constructing he house must have taken a considerable part of Golovnya's time.
In addition, Golovnya tried as much as possible to acquire material for construction that was left unused elsewhere, which als included visiting garbage dumps.
Some neighbors have referred to Golovnya as being an eccentric because of this way of working, but probably it is rather so, that he was someone with limited financial means, who in this way could build and decorate his house with simple, cheap things, a pattern not unknown in the field of art environments.
This way of obtaining and using scraps of building material led to the appearance of the house being somewhat untidy, as depicted in the very first photo.
At the same time, this form of collecting material gave Golovnya the opportunity to find things to use for making exterior an interior decorations.
Exterior decorations
So the second photo from above shows the side of the house with a structure that is unclear in terms of function, situated behind grilles, with decorations such as car wheel rims, bells and other things.
The third photo from above was a composition that probably also was added to the roof, although pictures do not confirm this. It's a colorful fantasy character, possibly part of a children's bicycle, with a base of three metal hemispheres.
Another composition on the roof is depicted above. It's a weather vane composed of metal basins, flanked by a number of spiral items.
Interior decorations
As far as the interior is concerned, the photos above and below only to a limited extent give an impression of the lavishness of the decorations. In this respect the video referred to in the documentation, is more informative.
A wall with many photos and portraits documented Golovnya's family history. There were pictures of his daughters and there was a painting that portrays his grandfather, Mikhail Ivanovich Bondarenko, and another one of his father who, as told by Golovnya, was in the Russian army, fighting against the Germans in 1942 near Kerch. 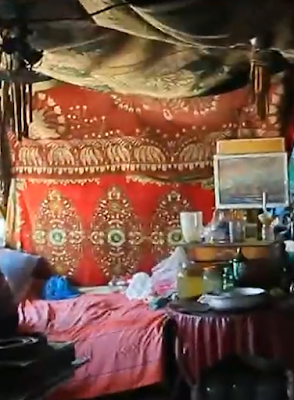 However, the family photos were just a small part of the many, many items that decorate the floor, the ceiling, the tables and cabinets, but especially the interior walls.
There were carpets on the floor, canvases on the ceiling and walls filled with a multitude of paintings and photos, cabinets covered with teapots, a variety of pendant lamps, thermos jugs ..... an extensive and at first sight disordered combination of all kinds of items. together however making an overwhelming visual impression. 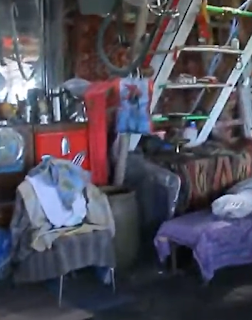 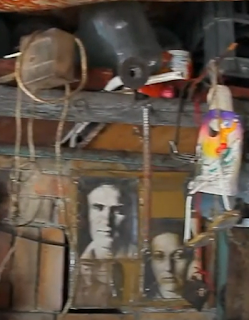 Not all items displayed in the interior were collected by Golovnya himself. Neighbors and friends also came along with remnants.
Some of those donors assumed aloud that the decorated interior for Golovnya was kind of a paradise, but he himself said that his house was more of a barn. This may indicate that he was not so much characterized by an inner urge to transform the living room of his house into a kind of an artistic collection, but rather that he was not able to stop collecting things.
A good look at the types of items that made up the collection (as shown in the images in this post) reveals that these are items that are typically found in living rooms in European countries, such as paintings, photos, clocks, lamps, bottles, curtains. Other items from the dump, such as old clothing, parts of old bicycles, garden equipment and the like, are missing in the items exposed in the interior.
So the peculiarity of the interior was not primarily in the type of decorations. The impressive, even alienating effect of the collection had mainly to do with it's large size, which in turn is related to the fact that Golovnya could hardly stop collecting and displaying leftover stuff, a characteristic that is encountered in many people who create an art environment.
The size of the collection, in conjunction with Golovnya's passion for collecting, contributes to the conclusion that the now-burnt items on the roof and the interior collection of leftover stuff could be viewed as a modest art environment in the capacity of a decorated interior and exterior. 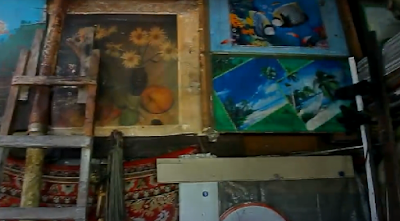 Documentation
* Article (May 2018) on the website of local newspaper Kerch.com
* Article (December 2020) on the same website with a report about the fire
Video
* Video (May 2018) by KerchNET TV  (4'25", YouTube)
thanks to Alexander Emelyanov, who not only drew my attention to this art environment, but also helped to make accessible the Russian spoken in the videos
Viktor Golovnya
House decorated with leftover stuff
Rybakova Street
Kerch, Crimea, Russia
site destroyed by fire 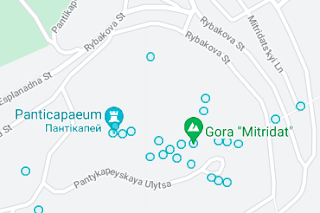