Located in Lemgo, a small town in Nordrhein-Westfalen, Germany, the Junkerhaus is an artwork as such, singlehandedly created by Karl Junker. The creation can be classified as an art environment, but although Junker has been seen as an outsider artist, German art historians currently do not relate him to outsider art any more.


I agree with these authors, but will present Junker in this blog since he for such a long time has been seen in various respects as an outsider artist.

Born in Lemgo, Karl Junker (1850-1912) early in his life lost his mother, father and brother, and from his seventh  he was educated by his grandfather.

In 1869 he went to Hamburg to learn the trade of carpenter. He fell in love with the daughter of his teacher, but this love affair did not last and around 1871 the young man went to Munich, where in 1875 he became a student at the Akademie der Bildenden Künste. It is unclear what he has been doing between 1871 and 1875. Maybe he was in the army for some years.

Around 1877, kind of finishing his artistic education, he began a long journey to Italy, to return in 1881 to Lemgo, where he would stay for the rest of his life.

Professionally trained as a carpenter and a visual artist, Junker tried to get a position in the arts, but he was not very successful and gradually he may have become an artist without any relation to the world of art. He had inherited an amount of money, so he could live independently.

In 1889 he asked the local authorities permission to build a house. It was to be constructed as shown by his own design, which was not exactly what authorities considered to be a "gutbürgerliches haus". However, they made no problems and agreed.

In 1891 the construction of the house as such was ready and Junker began decorating it on the outside and the inside. He has been working on this project until his death in 1912. 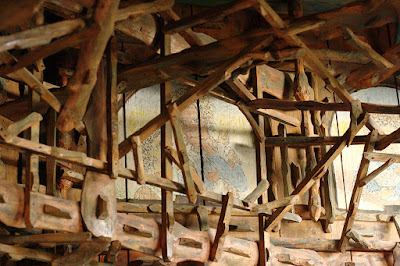 He designed all the furniture and constructed it himself from wood. And he decorated the various items in a rather personal style with woodcarving, paintings and small wooden constructs. 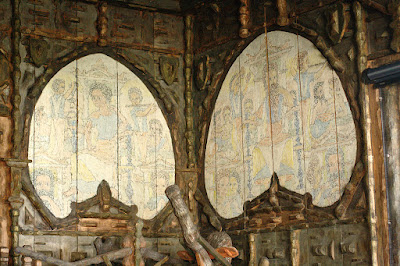 He made paintings on the wall, decorated the walls and the ceilings with wooden structures. 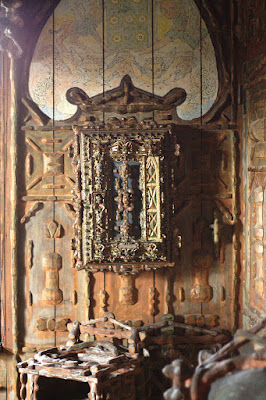 The house as a "Gesamtkunstwerk"

The layout of the interior of the house would enable a family to live there, with a sitting room, a master bedroom, a children's´room, a guests room and so on. But Junker himself did not use these facilities, nor did he marry and a raise a family. He was alone and lived and slept in a small room in the attic This has been seen as a sign of eccentricity, but if the house and the interior as such is the artwork, isn't it rather normal that you do not sleep or eat in the artwork?

In my opinion he was driven by an enormous creative ambition, directed upon making the house as such a complete artistic construction, what in German is named a Gesamtkunstwerk (an expression first coined by Richard Wagner)  He combined architecture, painting and wood sculpturing in the creation of this artwork.

In his visual art Junker would depart from the rather classical style he had been taught in München, and develop an individual approach. However, during his life and also thereafter, leading circles in German art never have given him any status as an artist. 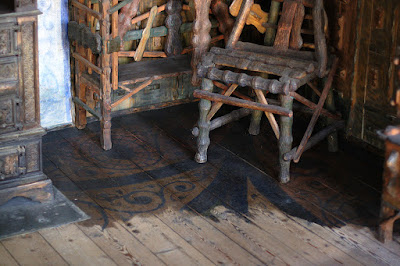 The locals of Lemgo may have regarded Junker as eccentric. Some German authors have diagnosed him as a schizophrenic. The trend was set by Gerhard Kreyenberg who, sixteen years after Junker died and without ever having met him, wrote the article  "Das Junkerhaus zu Lemgo. Ein Beitrag zur Bildnerei der Schizophrenen" in: Zeitschrift für die gesamte Neurologie u. Psychiatrie no.114, Berlin, 1928, p.152-172).

Kreyenberg interpreted Junker's art, which he obviously did not like, as the work of a schizophrenic.

Describing Junker's creative work as a result of and in relation with schizophrenia is rather easily done on many sites on the internet, also by writers who do not depart from a medical point of view, but from an artistic one. The schizophrenia approach can also be found in an article in Raw Vision; John MacGregor, Junker House, The architecture of madness, Raw Vision, nr 41 (2002)

Some scientists however (for example Hartmut Kraft, 2005) have a more differentiated opinion. Although Junker had fantasies that can be related with schizophrenia (he had constructed a throne in the sitting room and said to know the thoughts of Bismarck), his creative work was based upon carefully prepared sketches and was not done in a gush.

In the original version of this post (2009) I said it would be wise not too quickly accept causal relations between artistic drives/ambitions and psychiatric diseases.

Currently German art historians (like Carolin Mischer, Das Junkerhaus in Lemgo und der Künstler Karl Junker. Künstlerisches Manifest oder Ausserseiterkunst? Köln [SHVerslag], 2011) no longer accept the assumption of Junker's madness, nor do they see him as an outsider artist, but will regard him, following Carolin Mischer, as an artist who through his very special creation voiced an artistic manifest.

It has been reported that Junker himself said that only later generations would appreciate his creation, maybe after fifty or a hundred years. 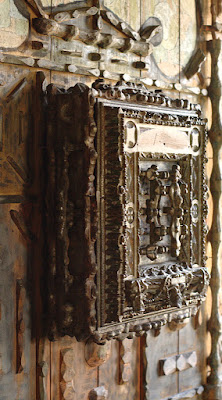 The house has become a museum

Since 1962 the city of Lemgo owns the house. Around 2000 a restoration started, which was finished in 2004. To accommodate visitors, an annex has been constructed, that is linked to the original house with a glass corridor. Because of the fragility of the wooden constructs (and to prevent theft and graffiti by visitors) not all rooms are open to the public.

Some documentation
* The Junker House (before it became a museum) appears  in Jarvis Cocker's Journeys into the Outside (1999, on YouTube in 2012, see my post of august 23, 2012)
*The official website of the Junker House (text in German and in English).
* Available on the internet: Bettina Rudhof, Building as in a dream, the Junkerhaus in Lemgo, 2010
* Another example of the actual view on Junker: Bettina Vaupel, Wie Karl Junker sich seine Welt schnitzte. Die Holzorgie von Lemgo. Article on website Monumente. Magazin für Denkmalkultur in Deutschland (august 2012)
* Also on the internet a publication of the museum (in German) Ein Aussenseiter in der Kunst. Karl Junker und das Junkerhaus in Lemgo. Bielefeld (Verlag für Regionalgeschichte, 2011)
* Article about Karl Junker on SPACES website