Jarvis Cocker, Journeys into the Outside 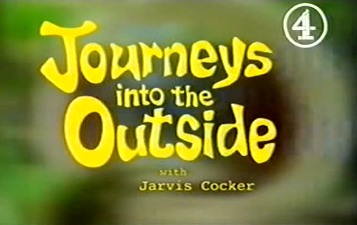 British singer Jarvis Cocker in 1998 made a trip along a lot of outsider environments in Europe and the USA in order  to produce a tv-movie, Journeys into the Outside, broadcasted by British Channel 4 in 1999.

This movie has become kind of a classic among those who are interested in outsider art and art environments by non-professionals. However, after the film was broadcasted, it didn't become available through any public medium.

But enthusiasts could rejoice: in April 2012 the movie was downloaded on YouTube  (however, since 2016 it is not available in some countries due to a copyright claim)

The movie comes in three parts. The first part deals with some classic French sites and when present those who created them. Jarvis' voice-over is in English, but his conversation with the creators of the sites is in French (subtitled in English).


These are the French art environments Jarvis Cocker visited:
* the sculpted rocks by Abbé Fouré (starts at 0'54")
* the mosaic decorated house and garden of Robert Vasseur, with Vasseur talking about the project (starts at 5'40")
* Bodan Litnianski's art environment, with Litnianski talking about the decorations and constructions he made (starts at 10'45")
* the house of monsieur G as it was some twelve years after he died, with fragments of the Prévost movie about monsieur G and his site, and an interview with Prévost (starts at 16'28")
* la Maison Picassiette, with an interview with a stepson of Raymond Isidore (starts at 21'25")
* the site of Chomo, with fragments of the Prévost movie, but without Chomo himself (starts at 27'00")
* facteur Cheval's Palais Idéal (starts at 36'35")

The second part deals with sites in the USA (out of topic in this blog, but of course very interesting).

Journeys into the outside is a classic indeed.
Posted by henk van es at 11:11 AM