With its almost a hundred inhabitants the community of Vilarnadal in Catalonia, Spain, is rather small and apart from a private castle, up to now the internet has no referrals to interesting sites in that village.

However, there is an interesting art environment in Vilarnadal, which, although its creator passed away in 2011, for a large part has been maintained and currently still can be seen from the street, as demonstrated in above picture.

Francisco Subirá i Bertran (1924-2011)¹, the author of the site, was born in a remote and isolated community in the north of Catalunya. In the early 1940s the family moved to Vilarnadal, north of Figueres. The father could work there as farmhand, assisting farmers in taking care of the cattle and herding sheep.

Life had tragic moments for young Francisco, a sister died at young age, his mother died from tuberculosis in the late 1930s and some years later a brother also died.


Subirá did his three years of military service in Girona, the provincial capital. Here he met his wife. They married in 1951, when he had completed his military duties. Having lost a daughter who died being born prematurely, the couple remained childless.

Staying in the house in Vilarnadal he had inherited from his father, Subirá just as his father earned his living by managing a herd of sheep, a job he held for some forty years.

His rather ascetic and quite life was confined to provincial Vilarnadal, and holiday trips to Lourdes and Madrid may have been the only way to have more mundane experiences.


Once a pensioner, having sold all cattle, Subirá wanted something to do, preferably something that would make him work with his hands. After trying drawing, he came up to making sculptures, which pleased him and kept him active for the rest of his life.

All together he has made some eighty creations, including a series of sculptures and bas-reliefs. The sculptures, stand alone creations and ensembles, were made by applying cement to frames of iron netting.

The creations are distributed over two plots, an area enclosed with a wall, opposite Subirá's house as in the first picture, and another plot further down the street, where Subirá originally had his studio.


Like other creators of art environments, Subirá's has depicted all kinds of animals, such as a lion, an owl, a turtle, a crocodile, various birds and so on.

He also depicted flowers, stars, the sun, the moon....

The villagers expressed no concerns about Subirá's creative activities. He was apparently a respected person.


Very interesting, in my opinion, are the sculpted ensembles he made, such as the Sirenes (mermaids), pictured above, centrally located in the walled garden.

The tallest mermaid holds up a nameplate with the Catalan colours and the four smaller mermaids represent the four provinces of Catalonia: Lleila, Girona, Barcelona and Tarragona. 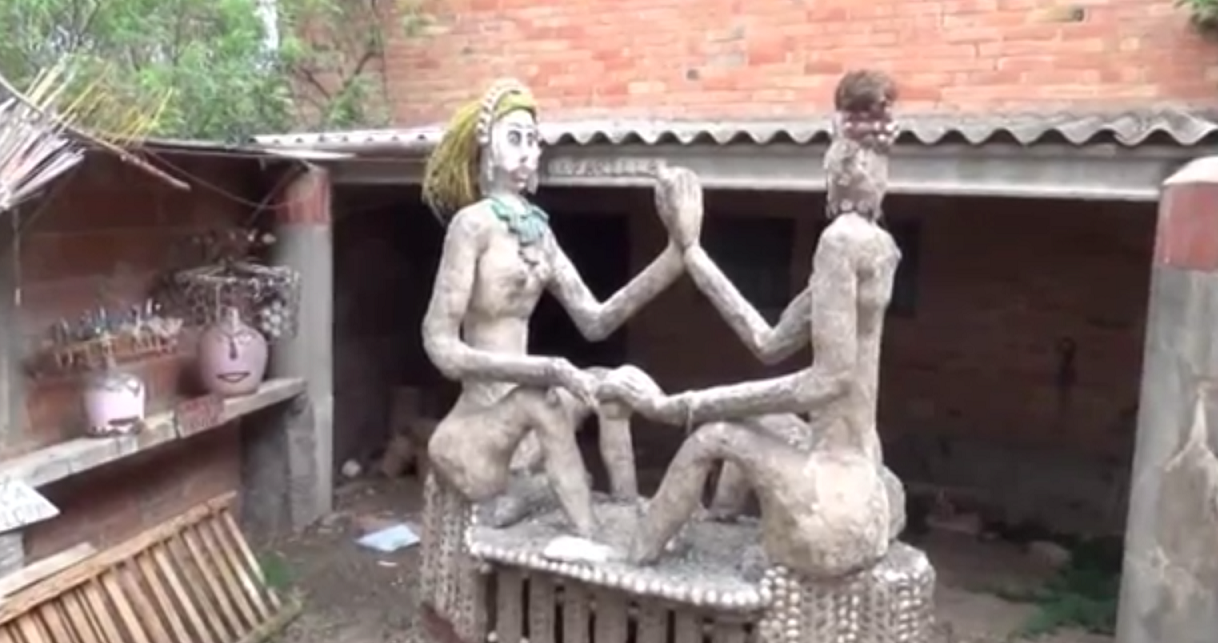 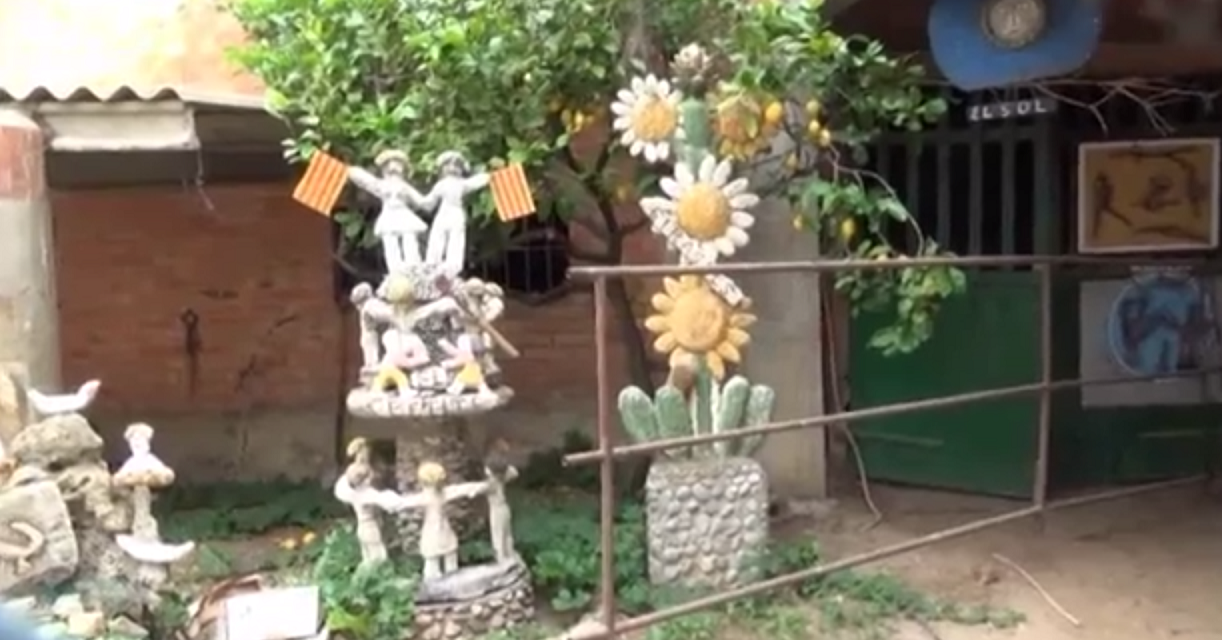 Another ensemble in this yard down the street is above group of Els Petits (the little ones), a pedestal with two groups of six people, hands together, depicted as if dancing, and on top two people holding Catalan flags.

Above pictured high rising sculpture, the tallest Subirá made,  located in the walled garden opposite the house, depicts a group of people making a human tower, a popular competitive activity at festivals in Catalonia.

The team members wear white trousers and a shirt with a specific color related to the city of origin of the team.

A rather impressive sculpture.

In 2005 Subirá and his wife decided to move to a residential home for older people near Figueres. Around 2008, to pay for the stay in that home, Subirá put the house in Vilarnadal for sale. The new owner promised to maintain the creations in the walled garden and so it happened indeed !!

The garden further down the street however was inherited by a distant family member and in recent years this site hasn't been maintained very well.

Francisco Subirá i Bertran passed away in 2011. 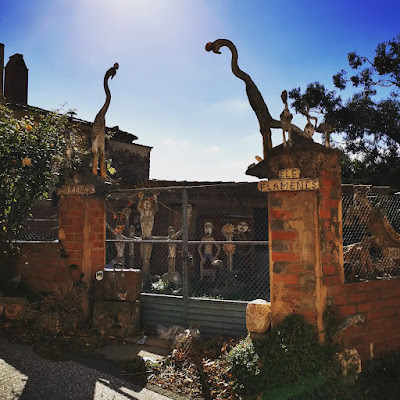 The pictures above and below, made in October 2021 by Tiramisu Bootfighter, who traveled trough Spain in the context of his project La Valise, Galerie Ambulante, show that especially the part of the site down the street is deteriorating. 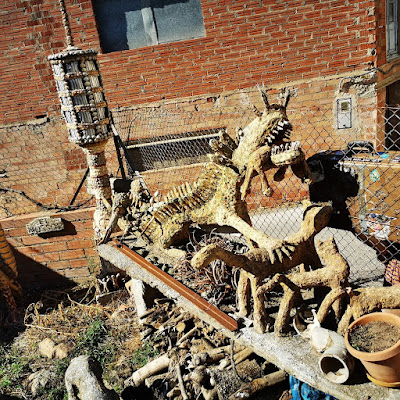 Documentation
* Entry on SPACES website (2014)
* The site got a scholarly review in: Jo Farb Hernandez, Singular Spaces. From the Eccentric to the Extraordinary in Spanish Art Environments, Seattle (Raw Vision, SPACES, San José State University), 2013. ISBN 978-0-615-78565-3, pp 505-517
* Article and a variety of pictures (November 2018) on the weblog of Sophie Lepetit, here and here

Video
* Scenes of the site (2014) on the video Provincia de Girona (Catalunya) trip, by Serflac (YouTube, starts at 27.03, cannot be embedded here)


note
¹ The only available written source (at the time of editing this post) about this art environment was Jo Farb Hernandez' recent book Singular Spaces, so I am indebted to her for factual data. Evaluative interpretations are my responsibility

Francisco Subirá i Bertran
17762 Vilarnadal, Girona, Catalunya, Spain
can be seen from the street
Posted by henk van es at 9:01 PM