Automates.....in France this term does not just refer to machines and instruments, but also to creations depicting people that are capable of making all kinds of movements.

We encounter such creations also in the field of art environments. For example Marcel Landreau's site had a scene of people dancing at a wedding party, Pierre Avezard's Manège has a variety of animated characters and Fernand Chapet's Parc des attractions is an outdoor collection of moving creations.

Life and works
The internet hasn't much biographical information about this artist.

Dehondt was born in 1962 or 1963, so currently (2017) he is in his mid-fifties. In interviews he has said that already at age fourteen he was trying to create impersonations of people. There is a single reference to an artistic education, but as a young man he did not succeed in settling as an artist and he had to work in some job.

However, as an artist in heart and soul Dehondt kept trying to realize his passion of making automates. Around 2000 he could fully devote himself to this activity. Initially he drove around in the region with a van loaded with automates to give performances on markets and other public places.

In 2006 he opened a museum/studio in Steenvoorde, where he stayed until the rental contract ended, after which he moved to Esquelbecq where, from December 2013, he has his current studio and museum.

Both Steenvoorde and Esquelbecq are situated in the north of France in an area adjacent to Belgium that runs to the east and south of the city of Dunkirk and is known as French Flanders.
In Esquelbecq (Eikelsbeek in Flemish) Dehondt found a place for his studio and museum in a building complex called La Minoterie, formerly a factory where grain was processed into flour.

Located in the center of the town near the market place it is an ideal location to attract visitors. And indeed, currently about four to six thousand visitors a year come to see the gigottes automates. 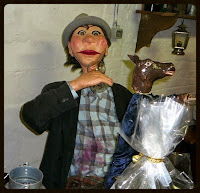 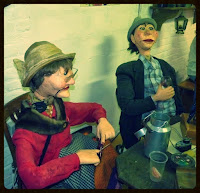 These visitors will see a variety of life-size creations that depict all kind of characters one can meet in daily life. They can make movements and are programmed to interact with people around.

So one will see a group of musicians as in the upper pictures in this post, but also a shoe polisher, someone who is snoring, a cleaning lady, someone who drinks from a glass, an elderly lady knitting,  a group of majorettes and so on......

Dehondt is constantly supplementing the collection. 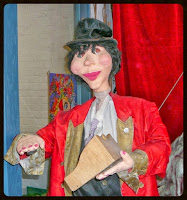 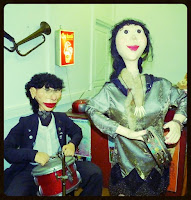 In creating his automates Dehondt uses a variety of discarded materials, such as household appliances, vacuum cleaners, computers or parts of washing machines. It happens that people bring him materials they no longer need.

He himself also arranges the electronic mechanisms which generate the movements of the characters.
Body parts such as faces and hands are made from resin and pulp, plaster or clay. The characters are dressed with hand-made appropriate garments, designed by the artist.

Although Dehondt may have enjoyed artistic training, his way of creating and portraying his characters has the connotation of a non-mainstream artist creating popular art, which is reinforced by the great passion he shows.  As a visitor of his museum wrote: "Bruno Dehondt is the boy who always stared through the window, dreaming in the classroom and after a few decades finally woke up in a world he created himself".

Dehondt participates in exhibitions and also in various street performances. including the parades of Géants (giants) customary in the north of France, spectacles in which meters high dolls are led through the streets. He has created géants for parades in various communities in the region.

He also organizes workshops for young people where they are guided to create automates.

Documentation
* The various websites of tourist offices in northern France refer to the Museum Les gigottos automates, for example the tourist office of Hauts-de-France
* Bruno Dehondt's own website and his page on Facebook
* Article (2013) in regional newspaper Voix du Nord about the removal from Steenvoorde to Esquelbecq