The picture above shows a decorated house in the village of Bril’kov, part of the community of Volozhin in Belarus. At first glance it seems that we are dealing here with frescoes, but that is not the case, these decorations have been created by using caps from plastic bottles.

This is a rather young art environment. The project was begun in the midst of 2014 after Elena Aleshko with a grandson was browsing a book about special architecture and was impressed by a house decorated with bottle caps.

She talked about this with her husband Vladimir Aleshko, who was retired, and together they decided to try to realize such a decoration themselves. 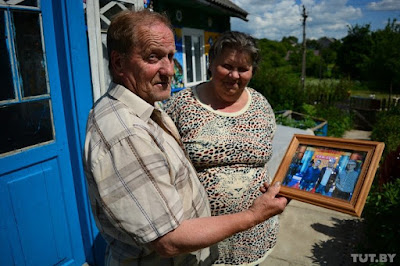 A pilot project consisting of making a decoration with two swans (still present on the front side, see first photo) proved successful and from that moment on the life of the couple was completely dominated by the further decoration of house and yard.

Each of the two had a clear role. Elena sought and selected examples and made the designs. Up close it is easy to see that a variety of scenes has been carried out in a cross-stitch pattern as is usual in embroidery. Vladimir would take care of the assembly and eventual construction works, such as the construction of a summer house to realize more exhibition space.

In preparing the addition of a new scene, first a drawing is made at actual size, which on test is inlaid with caps. If the result pleases, the creation will be applied to the appointed spot. 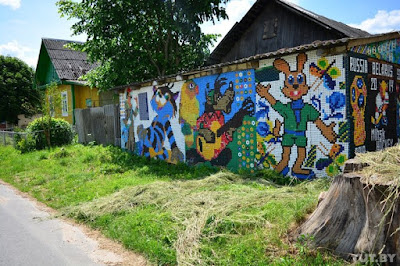 In the summer of 2017, after the Aleshko couple had been working on the project for some three years, the decorations altogether covered an area of about 100 m² and it was estimated that some 100.000 caps had been processed.

These caps are only partially derived from their own household. Vladimir Aleshko gets part of the material from a nearby waste processing company that recycles plastic bottles without using the caps. 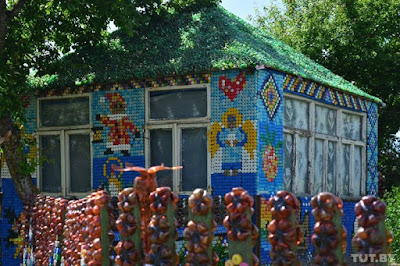 Various themes can be distinguished in the decorations.

A variety of animals has been depicted and then a lot of attention is paid to cartoon characters and heroes from well-known Russian television series. 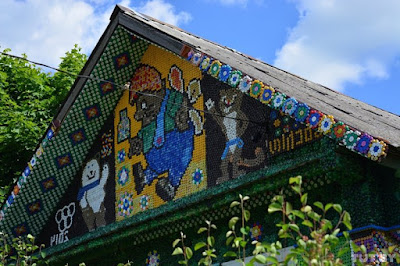 Sport is another important theme.

As can be seen in the picture below, one of the walls has references to the World Hockey Championship (Minsk 2014), the Olympic Winter Games in Sochi (2014) and the football World Cup in Russia (2018). 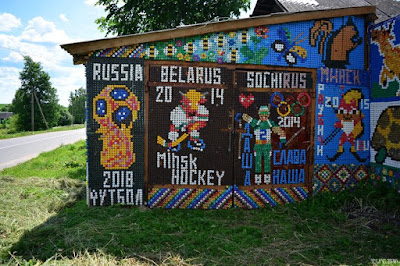 Documentation
* Elena Bychkova, article (July 2017) in newspaper TUT.BY (Minsk, Belarus)
* In the summer of 2017 the international Peace Run came past the house of the Aleshko couple, which was reported on their website
Vladimir and Elena Aleshko
House decorated with bottle caps
Bril'kov, Volozhin, Belarus
site can be seen from the street
Posted by henk van es at 9:53 PM