If there is a relationship with the field of art environments, this weblog also pays attention to decorations in churches, such as for example with regard to the church in Wirwignes, France, decorated by Abbé Paul-André Lecoutre, the church in Ménil-Gondouin, also in France, decorated by Abbé Victor Paysant and the church in Goring-by-Sea, England, transformed in a replica of the Sistine Chapel by Gary Bevans.
Also, this blog has some reviews of decorations on the outside of churches, such as the one in Montardit, also France, built and decorated all around by the local priest Jean-Marie Piquemal and the church in Mulyanka, Perm region, Russia, built and decorated by Alexander Ladogina.
With regard to the first three churches, the character and the number of decorations and also the commitment of the artist involved, was the reason for inclusion in this blog. With regard to the second two it was mainly because the churches or chapels were built and decorated single-handedly by respectively the priest and an involved resident.
The decorated chapels in the small community of Gabovo.
What is presented in the following review took place once again in the Perm region, Russia, this time at the end of the 19th century.
Nikon Maksimovich Kiryanov (1860 - 1906) was a farmer, living and working in the small village of Gabovo in the Karagay district of this region. The village, which today doesn't exist anymore, at the end of the 19th century had with its eight households rather few inhabitants.
To attend a church service on Sunday, residents had to go to the church in the village of Zyuganov, about ten kilometers away. 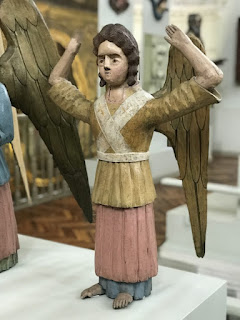 At some point, perhaps in the 1890s when Kiryanov was somewhere in his thirties, he got the idea that he should construct a church himself.

He indeed started a building project and with the cooperation of some fellow villagers, a church and a chapel were built.

And it didn't stop there. Kiryanov also started making sculptures to decorate the buildings, All together he created about 500 sculptures..

The larger wooden sculptures of the Christ, saints, angels and so on were arranged in the church and the walls and ceiling of the chapel were decorated with smaller creations, such as cherubs, as in the image below 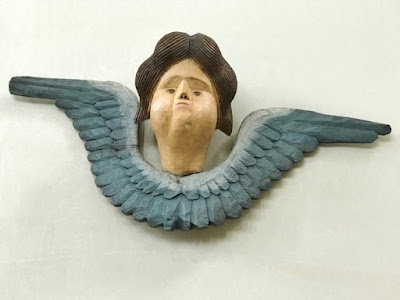 The windows of the chapel were made of colored glass, which gave the interior a colorful atmosphere. This was also obtained by numerous paper flowers and glass beads, hanging in garlands from the ceiling.
The angels depicted in the first two images have bulging eyes and sunken mouths, a sign of thyroid disease, a common ailment among the rural population in those years.
One of Kiryanov's most notable works is the composition depicted below that depicts the crucifixion surrounded by thirty-four cherubim's heads. Russian and foreign experts have been asked if they knew about similar creations in other collections, and it turned out that there were none, so this sculpture is probably unique.
Kiryanov died in 1906 at age 46.
Twenty years later, in 1926, Nikolai Serebrennikov, who at that time was director of the Perm Art Gallery, visited the village of Gabovo and took notes of what he found in the then still existing church and chapel. He published a book with his findings in 1928.
Serebrennikov noted with some disappointment that Kiryanov's work bears witness to the decline of naive wooden sculpture. As he wrote: This naivety, the brokenness in the pose of the figure, noticeable flaws in form, the lack of artistic tasks for this sculptor and the constant desire simply to carve and carve characterizes the end of folk sculptures.
In later years the two churches were destroyed and many sculptures were also lost. Today there are only 18 left, which are stored and on display in a depot of the museum Perm Art Gallery, located in the tower of the former Spaso-Preobrazhensky-cathedral in the center of the city. The documentation below has some referrals to this collection, that can be visited.
Documentation
* Short article (2010) in Live Journal
* Article (May 2017) on website Newsko
* Website of Viljukova with images of the religious wooden sculptures stored in the Perm Museum, including some by Kiryanov
* Article (March 2018) by Pavel Kremnev on Yandex, another text about the collection
* Article (April 2018) by Grigory Nogovitsyn on website Zvezda also about the collection
Nikon Maksimovich Kiryanov
Wooden sculptures in self-built chapels
Gabovo, Perm region, Russia
the village and its chapels don't exist anymore,
a small part of the sculptures is in the depot of the Perm Art Museum
(can be visited)
Posted by henk van es at 3:34 PM